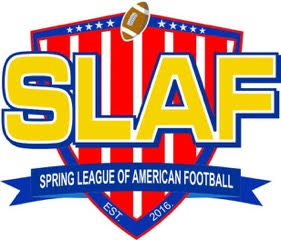 Are we ready for more football? A new study and some veteran executives think so. Increasing subscribers in the digital space is an achievable goal with the right product, according to the Beta Research Corporation which was commissioned by the Spring League of American Football (“SLAFootball”), a new entry into the never-ending quest to satisfy out need for the gridiron 24/7.

Two well respected veteran sports media and finance executives today announced plans to launch the Spring League of American Football, which will begin play as early as 2018. Led by longtime Madison Square Garden Chief Financial Officer Robert Pollichino and veteran television programming executive Michael Lardner the duo has created a unique plan for generating immediate fan interest. The structure of the league will divide the US into ten exclusive territories based on competitive collegiate football rivalries. Players can compete only for the team in the territory where they played college football. Larnder’s brother Rex, another longtime TV and college sports execitive, will also have a key role in the venture.

“In the media landscape, content is king, and football is the king of content.” said veteran college football producer, Michael Lardner. “The creation of a new compelling football product, when there is no football available, creates an opportunity for a media partner, team owners and fans based on our recent research.” He continued, “We are capitalizing on the popularity of players in their college conferences and the passion for these historic rivalries. There has never been more television exposure for college players than today because there is an unprecedented number of televised games, sports channels and highlight-shows dedicated to the sport of football.”

“Not only does this league make sense for the fans, the economic model shows it is a solid investment for a media partner, individual team-owners and league investors alike,” said  Pollichino, CFO of MSG who owns the NY Knicks and Rangers. “This exclusive proprietary sports programming which is not available in the market today, can also provide a media partner with league ownership,” he added.

The announcement for SLA Football comes after the group commissioned a research study by BETA Research Corporation which validated the high level of interest that fans have in the concept of this league, especially at a time of year when live collegiate and professional games are not available. Research showed a host of compelling statistics, such as:  83% of men who watch television sports (18 -34) would make every effort to watch, or be more likely to watch SLA Football games. As well as: 20% of those who do not stream programming through a service like Netflix, Amazon Prime or Hulu would be very likely to subscribe to a streaming service if it was the only way to view a professional spring football game.  (BETA Research Corporation, 2016.) This clearly shows that exclusive sports content is a valuable commodity.

The executive team is currently in negotiations with additional ownership groups and media partners, with other announcements coming in the fourth quarter of 2016 and early in 2017.

Jerry Milani is a freelance writer and public relations executive living in Bloomfield, N.J. He has worked in P.R. for more than 30 years in college and conference sports media relations, two agencies and for the International Fight League, a team-based mixed martial arts league, and now is the PR manager for FAN EXPO, which runs pop culture and celebrity conventions across North America. Milani is also the play-by-play announcer for Caldwell University football and basketball broadcasts. He is a proud graduate of Fordham University and when not attending a Yankees, Rams or Cougars game can be reached at Jerry (at) JerryMilani (dot) com.
@gbpackjerry
Previous ‘Pitch’ Debuts on Fox Thursday
Next Topps Now™ Surpasses 300,000 Cards Sold In First Year