Jerry Milani October 7, 2019 News, On The Air Comments Off on FloSports To Provide Coverage Of Collegiate Wrestling’s Premier Events In San Diego 990 Views 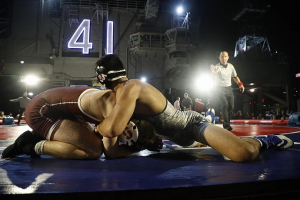 In the morning, the four schools will compete inside the Port Pavilion on the historic Broadway Pier. FloSports, the innovator in live digital sports and original content, will provide worldwide live and on-demand coverage of the AFC Duals at Broadway Pier on FloWrestling.org. Fresno State and Wisconsin will grapple at 9 a.m. PT, followed by Fresno State-Navy and Wisconsin-Army at 11 a.m. PT. A limited supply of tickets priced $20 are available at https://2019afcduals-broadwaypier.eventbrite.com.

The AFC Duals at Broadway Pier will serve as the precursor to the main event, the Battle on the Midway, which will be nationally-televised by CBS Sports Network from the flight deck of the famed USS Midway. The Battle on the Midway will feature twin duals in prime-time, including Fresno State-Army West Point at 6:30 p.m. PT and Navy-Wisconsin at 8:30 p.m. Tickets for the Battle on the Midway start at $25 and are available at www.BattleOnTheMidway.com or https://botm2019.eventbrite.com.

Presented by Left Coast Wrestling and the San Diego Imperial Kids Wrestling Association (SDIKWA), 2019 will mark the first-ever AFC Duals at Broadway Pier and the third-annual Battle on the Midway. NCAA rules limit the total number of days in which college wrestlers can compete, however there is no limit to the amount of times in a day that they can wrestle once they’ve weighed in, which led to the creation of this year’s AFC Duals at Broadway Pier.

Jerry Milani is a freelance writer and public relations executive living in Bloomfield, N.J. He has worked in P.R. for more than 30 years in college and conference sports media relations, two agencies and for the International Fight League, a team-based mixed martial arts league, and now is the PR manager for FAN EXPO, which runs pop culture and celebrity conventions across North America. Milani is also the play-by-play announcer for Caldwell University football and basketball broadcasts. He is a proud graduate of Fordham University and when not attending a Yankees, Rams or Cougars game can be reached at Jerry (at) JerryMilani (dot) com.
@gbpackjerry
Previous FloSports Unveils a Complete Rebrand
Next NTT Delivers Ultra Reality Viewing of Live MLB Postseason Game