Riptide Partners, a New York based consulting business offering full-service Customer Experience (CX) solutions for sports teams and venue operators, today unveiled their recent survey of actual New York area event attendees, which revealed a much faster return to event timeline for consumers than has been widely discussed. It is the first, and most comprehensive, study of actual event attendees in the New York area since the Pandemic shutdown began.

“There are literally hundreds of theaters, arenas and venues of all sizes that have been affected by the shutdown, and it was our desire to get a better handle on the thoughts of those venue patrons who had attended events prior to the shutdown. We think this survey tells a slightly different story than what was originally thought,” Rob Comstock, Riptide Partners co-founder said. “The variable of when people can return to venues in larger groups will be decided by health and government officials, but when that date is set, we believe that people will feel safer, and come back sooner, than anticipated based on the survey responses we have received.”

The average time to return across all levels of concern is 3.5 months, with extremely concerned respondents saying they will wait an average 5.2 months, while those who are not at all concerned will return immediately. A majority of the concert/event goers were female, a majority of the sporting event goers were male. We also saw a direct correlation between fan avidity and likelihood to return. The most avid fans are ready to return immediately and least concerned about the health risks.

The two biggest factors the group were weighing were touch points of areas like seating and bathrooms, while most indicated the food and beverage safety would be handled at an acceptable level. Anxiety over being in a crowd is the most frequently cited concern at 44% of respondents.

As far as areas of concern that would need to be addressed in the time before a safe return to venues, screening attendees and thorough disinfection of venue were the two most common changes requested. 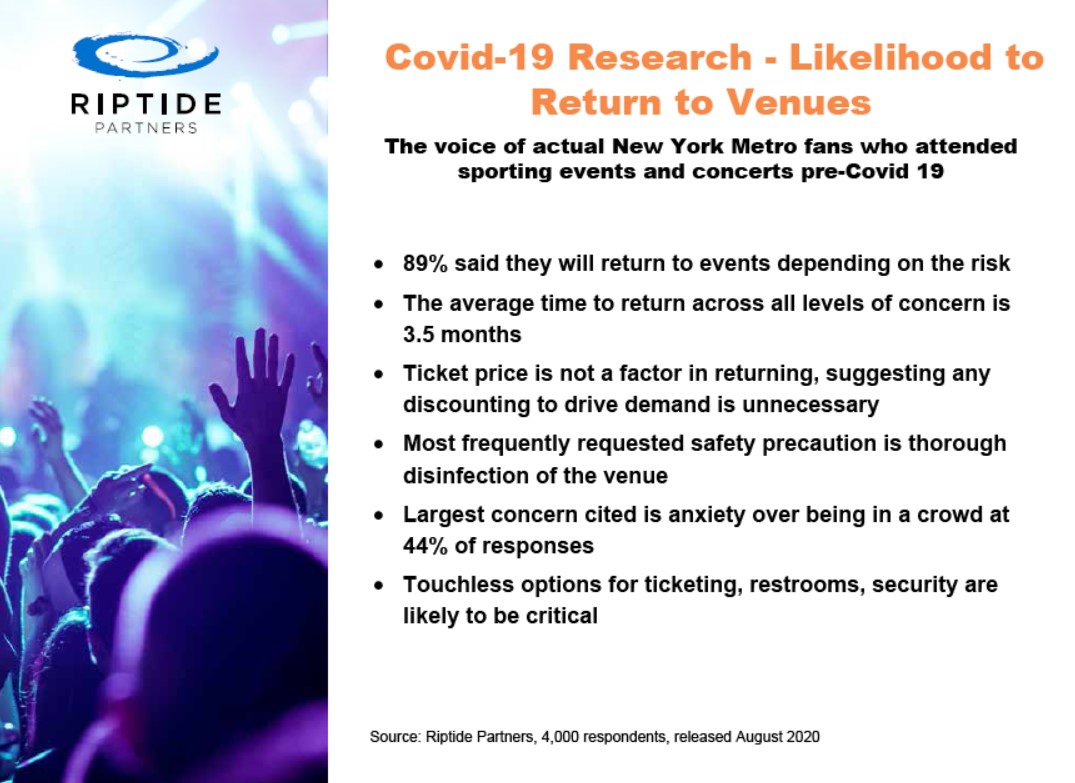 This pertains to indoor venues only, as the information on those willing to attend outdoor events has been made available by officials and is already occurring in some areas.

Riptide Partners, which works actively with venues across the United States, is planning on doing similar hyperlocal surveys in the coming weeks in other regions, with the feeling that the local focus and feelings of avid attendees can tell a clearer story for all involved and help businesses better gauge the coming months. This information, if leveraged by teams and venue operators, can help understand guest sentiment and their preferred safety precautions by market and region as the country begins to reopen. We know likelihood to return and preferred safety precautions will vary by market and we’re prepared to help our clients build an operational playbook specific for their fanbase.

Founded in 2018 by former Madison Square Garden Company Chief Operating Officer Rob Comstock and MSG SVP of Customer Experience Paul Klass, Riptide Partners are the only Medallia partner offering a fully supported and customized solution tailored to the Sports & Entertainment space. Riptide and Medallia will enable bottom-line improvement and a customer-centric culture driven from real-time guest feedback across all touchpoints, both physical and digital.

Jerry Milani is a freelance writer and public relations executive living in Bloomfield, N.J. He has worked in P.R. for more than 30 years in college and conference sports media relations, two agencies and for the International Fight League, a team-based mixed martial arts league, and now is the PR manager for FAN EXPO, which runs pop culture and celebrity conventions across North America. Milani is also the play-by-play announcer for Caldwell University football and basketball broadcasts. He is a proud graduate of Fordham University and when not attending a Yankees, Rams or Cougars game can be reached at Jerry (at) JerryMilani (dot) com.
@gbpackjerry
Previous Madigan Made Mark In Modernizing Football
Next Veteran MMA Analyst Jimmy Smith to Host New Show on SiriusXM