Madigan Made Mark In Modernizing Football 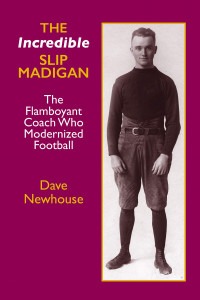 When thinking of classic old-time college football coaches, names like Knute Rockne, Amos Alonzo Stagg and Pop Warner probably come to mind first. If you want to ease into the 1940s, Eddie Robinson, Bear Bryant and Woody Hayes got their starts then and achieved great fame. But Slip Madigan? There was a time that the St. Mary’s College head man was among the best-known coaches in the country, and while he is largely forgotten today, the Notre Dame grad was among the early influential mentors and not only put the Moraga, Calif., school on the map, but also influenced how college football was viewed and administered nationwide.

In his book The Incredible Slip Madigan: The Flamboyant Coach Who Modernized Football (St. Johann Press, 197 pps.), author Dave Newhouse brings Madigan and his exploits back into the fold, concentrating most on his 1921-1939 tenure at St. Mary’s, during which Newhouse details how his success as athletic director and coach of the football and, during the early years, baseball and basketball squads, basically saved the school’s very existence.

A disciple of Rockne, who coached him in his three years at South Bend, Madigan didn’t just adopt formations from his mentor. He borrowed the master’s flair and sense of promotion, spreading the “Galloping Gaels” gospel with cross-country jaunts with his team, most often to play then-national power Fordham in New York, with stops along the way to entertain the alumni and media who were in the traveling party.

Assembling some of the best teams on the West coast for years, Madigan was able to recruit top players, mostly from the region. His squads had their share of success against perennial powers like Cal and USC, and by playing some of the other growing schools in the region like Univ. of San Francisco was able to help those programs thrive. 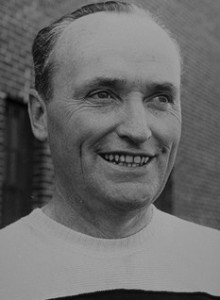 Newhouse, through interviews with Madigan’s son and others, paints an even more forward-thinking picture of the man. An early proponent of using publicity to its fullest, Madigan brought his Gaels to Hawaii, the first college team to play a game there, and along with his publicist helped draw big crowds, which set into motion another modern perk, as his contract called for a percentage of the gate to be added to his annual salary.

Though he coached a couple of years at Iowa during World War II at the end of his career, Madigan left the profession for the more profitable real estate world, a decision that while it took advantage of his acumen and served him well financially, is likely why he has “slipped” from the college football fan’s consciousness, while Rockne, Stagg and Warner are remembered.

Followers of the sport will recognize many of Madigan’s innovations as commonplace today. Perhaps the first coach to actively stalk the sidelines rather than sit on a bench barking instructions, Madigan heard the often good-natured jeers from St. Mary’s opponents, “Sit down, Slip!,” which he wore as a badge of honor, even encouraging the barbs. Newhouse brings this and the many details of his life in a highly readable narrative for any college football fan.

Jerry Milani is a freelance writer and public relations executive living in Bloomfield, N.J. He has worked in P.R. for more than 30 years in college and conference sports media relations, two agencies and for the International Fight League, a team-based mixed martial arts league, and now is the PR manager for FAN EXPO, which runs pop culture and celebrity conventions across North America. Milani is also the play-by-play announcer for Caldwell University football and basketball broadcasts. He is a proud graduate of Fordham University and when not attending a Yankees, Rams or Cougars game can be reached at Jerry (at) JerryMilani (dot) com.
@gbpackjerry
Previous Mets’ Alonso Curates Topps Special Collecible Set Of 50 Cards
Next NY Sports and Concert Attendees Likely to Return To Venues, New Riptide Partners Survey Unveils