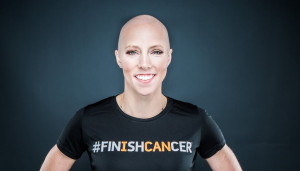 When five-time U.S. Olympian and 2018 gold medal cross country skier Kikkan Randall learned of her selection as the AKTIV Against Cancer Inspiration Award winner, it was another in a series of major honors for the 35-year old who had recently announced her retirement from active competition. A short time later, the honor became even more fitting, as she was diagnosed with Stage 2 breast cancer.

“I was first told of the award two weeks before my diagnosis,” said Randall just prior to Wednesday’s ceremony, at which she and Dr. Jordan Metzl were honored by the group helping to fund groundbreaking cancer research. “It is an honor to receive this award and to be seen as a potential inspiration to some, I hope I can encourage females everywhere to be physically active, as I try to do with the incredible Fast and Female organization.”

Randall, a 13-time World Cup champion and three-time sprint winner, is an active proponent of living a healthy lifestyle and spreading the word about the need to receive medical check-ups early and often, a practice that led to her early diagnosis.

AKTIV Against Cancer was co-founded by all-time great runner Grete Waitz and current Executive Director Helle Aanesen in 2007. The fourth-annual awards honor the nine-time NYC Marathon champion, who passed away in 2011 after a battle with cancer.

“Grete was one of my role models growing up,” added Randall. “Not just in her running, but that she always chose to do good for others. I’m sorry I never got to meet her but I’m proud to accept this award with her attached to it.”

Dr. Metzel, selected for his commitment in the health and wellness space, was pleased to meet Randall for the first time on Wednesday, their honors and AKTIV Against Cancer bringing their shared goals together.

“Such an incredible story, harnessing the power of being a world-class athlete to battle through such a terrible diagnosis,” he said of Randall. “Everything about her is just so inspirational, and I’m honored to be on stage with her.”

Jerry Milani is a freelance writer and public relations executive living in Bloomfield, N.J. He has worked in P.R. for more than 30 years in college and conference sports media relations, two agencies and for the International Fight League, a team-based mixed martial arts league, and now is the PR manager for FAN EXPO, which runs pop culture and celebrity conventions across North America. Milani is also the play-by-play announcer for Caldwell University football and basketball broadcasts. He is a proud graduate of Fordham University and when not attending a Yankees, Rams or Cougars game can be reached at Jerry (at) JerryMilani (dot) com.
@gbpackjerry
Previous Sports Industry Veteran Takes On New Role In Soccer
Next Cheribundi Expands ESPN Sponsorship Of Bowls, Hoops