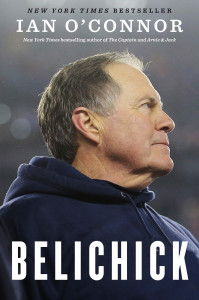 With five Super Bowl titles, 17 straight winning seasons — and counting — and more than 40 years on NFL sidelines, Bill Belichick is considered by many to be the greatest coach in pro football history. From the historic highs of the five championships to the lows of his time at the helm of the Browns and various “scandals” like “Deflategate” and “Spygate,” Belichick has his legions of fans and detractors. And the new biography Belichick: The Making of the Greatest Football Coach of All Time (Houghton Mifflin Harcourt, 492 pps, $28.00) by award-wining columnist and bestselling author Ian O’Connor takes readers through it all, with a reporter’s detail that brings Belichick’s full character into focus.

Belichick’s is for sure a complex story. Looking for every edge to win has been part of his DNA—literally, as the son of a respected longtime college assistant, Steve Belichick, notably at the Naval Academy for more than 30 years. Bill played at Division III Wesleyan University, squeezing the most out of his admittedly limited playing ability but rising up the coaching chain after graduation.

After a successful run as defensive coordinator with the Giants, which included two Super Bowl championships under Head Coach Bill Parcells, Belichick got his first head coaching job in Cleveland. Though he came out the other end of a five-year run at the Browns’ helm with an underwhelming 36-44 mark, some of the mistakes he made during that era helped set him up for later success, though many of the wounds, O’Connor notes, were self-inflicted, from draft picks that didn’t pan out like Craig Powell, Patrick Rowe and others to a prickly personality that started, as O’Connor reported, with his declaration that he “…worked too long and to hard for this chance to let you guys f*** it up for me.” His dismissal from Cleveland by owner Art Modell coincided with the team’s move to Baltimore, the clean break offered by the franchise shift the logical opportunity to cut ties.

A return to the defensive coordinator position under Parcells, this time with the N.Y. Jets, came next, and though it led to the head coaching job in New England in 2000 (famously after being named Jets coach before resigning a day later), that was never preordained. O’Connor writes, “He’d proven nothing as a head coach before running away from a team in the biggest market that was only one season removed from reaching its sports final four.”

The ensuing machinations that resulted in Belichick heading northeast strained his relationship with Parcells, but three Super Bowls in Belichick’s first five years in New England cemented his place not just in Patriots history but in NFL lore. O’Connor digs deep into these championship seasons, as well as the behind-the-scenes elements that went into Spygate and Deflategate, with new details of how they were handled internally: Belichick claimed he didn’t know that the kind of filming done in Spygate was not allowed, and essentially deflected most of the Deflategate blame to QB Tom Brady.

O’Connor looks at Belichick’s relationships with Brady, Parcells, Modell, his first New England QB Drew Bledsoe and others, identifying key moments where each of those broke down.

Though its subject didn’t cooperate with the book, Belichick is a thorough study of the man, with 350 interviews ranging from his Wesleyan teammates and coaches to fellow coaches, friends and others who help complete the profile. His charitable works and kind acts are noted, humanizing the man whose personal life has remained largely hidden, by design.

Jerry Milani is a freelance writer and public relations executive living in Bloomfield, N.J. He has worked in P.R. for more than 30 years in college and conference sports media relations, two agencies and for the International Fight League, a team-based mixed martial arts league, and now is the PR manager for FAN EXPO, which runs pop culture and celebrity conventions across North America. Milani is also the play-by-play announcer for Caldwell University football and basketball broadcasts. He is a proud graduate of Fordham University and when not attending a Yankees, Rams or Cougars game can be reached at Jerry (at) JerryMilani (dot) com.
@gbpackjerry
Previous ESPN’s 30th Season of MLB Coverage Starts With 14 Season-Opening Games in 2019
Next NBA Announces First Betting Data Partnerships In The U.S. With Sportradar And Genius Sports