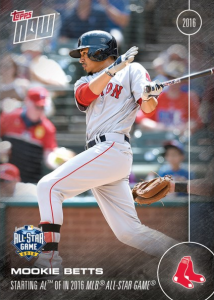 The Topps Company, Inc. will turn to its fanbase once again to decide who is worthy of the iconic Card No. 1 in 2017 Topps® Baseball Series One with  the return of public fan voting. The voting will open to the public from Tuesday, October 11 at 10 a.m. EST through Wednesday, October 19 at 11:59 p.m. EST through the Topps Blog found under the Rediscover tab on topps.com. Fans can also cast votes through Topps’ twitter account (@ToppsCards). Fans will be able to either “retweet” or “like” a tweet assigned to each of the sixteen nominees which will count as a vote. Thousands of online votes poured in last year, with Mike Trout the eventual Card No. 1 winner.

“The first card is something of great importance to Topps® Baseball each and every year.” said David Leiner, VP & General Manager of North American Sports and Entertainment for Topps. “We feel it is a great opportunity to include collectors and fans in creating the product by deciding who is most worthy of the number one card spot.”

Card No. 1 voting for this year will include familiar names from last year, as well as some new exciting nominees. Along with Mike Trout, players in the final five voting from 2016 return for a chance to triumph and be celebrated as Card No. 1. They include Buster Posey, 2015 NL Rookie of the Year winner Kris Bryant, and 2015 AL & NL MVP’s Josh Donaldson and Bryce Harper. New players on the ballot include 2016 NL & AL Rookie of the Year candidates Corey Seager and Gary Sanchez, and 2016 AL MVP hopeful Mookie Betts. The full list of contenders is listed below.

Baseball fans are encouraged to vote and promote the contest on social media to help get their favorite player featured on Card. No. 1. Use the hashtag #ToppsVoteNo1.

Jerry Milani is a freelance writer and public relations executive living in Bloomfield, N.J. He has worked in P.R. for more than 30 years in college and conference sports media relations, two agencies and for the International Fight League, a team-based mixed martial arts league, and now is the PR manager for FAN EXPO, which runs pop culture and celebrity conventions across North America. Milani is also the play-by-play announcer for Caldwell University football and basketball broadcasts. He is a proud graduate of Fordham University and when not attending a Yankees, Rams or Cougars game can be reached at Jerry (at) JerryMilani (dot) com.
@gbpackjerry
Previous FloSports Announces Launch of OTT Apps on Roku and Apple TV
Next Hometown Networks Launches Today, Giving Communities, Schools and Groups Low-Cost Live Webcasting and Production Services