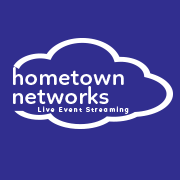 A pair of proven entrepreneurs, with extensive experience in marketing, sports and television, are behind Hometown Networks, a new live streaming platform that will enable communities and schools to provide coverage of sports and other events to audiences around the world.

“Every town in America can now have their own TV network, for sports, special events, and other activities, through the magic of Hometown Networks,” said Rasmussen, the man who changed the way we watch sports and television with his entrepreneurial vision for ESPN in 1979. “The system is designed to be easy for anyone to use”.

“Can you imagine the possibilities for a young high school student using their iPad or tablet to produce a live webcast of a sports event, direct the cameras, add replays, and provide live play-by-play commentary?  What a tremendous opportunity for young people!” Rasmussen said.  “Hometown Networks will benefit parents, grandparents, alumni and fans of both high school and other sports teams around the globe.”

“I have known Bill for a number of years, and I have always wanted to work with him. We both share a passion for sports and for new technology that can enable fans and friends to join in that passion,” said Wortham. “We see a need to make quality sports coverage affordable in the largely untapped local and hyperlocal markets, in particular high school sports.  We now have a way to stream a live event from anywhere in the world to anywhere in the world.”

The new venture is also involved in discussions with a major national brand for sponsorship of Hometown Networks.

According to New Port Richey Mayor Rob Marlowe, “We are proud that New Port Richey is home to this exciting new business, and that one of the pillars of our community, Rod Wortham, has partnered with a long-time friend of the city, Bill Rasmussen to launch Hometown Networks.”

Wortham has lived in New Port Richey for 13 years.  He is the CEO/Founder of MyNetworkOne, a full service marketing agency with account executives throughout the US and Canada, and the MNO Online Marketplace. He is also a partner with Tampa Bay Multi-Media, a local video production and live streaming company.

Rasmussen founded ESPN in the summer of 1978.  The idea of an all-sports cable TV network captured his imagination.  By September 7, 1979, ESPN was on the air for the first time, 14 months from Rasmussen’s moment of inspiration.  A life-long entrepreneur and sports fan, Rasmussen’s innovations in advertising, sports and broadcasting are numerous and include not only the creation of ESPN, but also the concept for “Sports Center,” wall-to-wall coverage of NCAA regular- season and “March Madness” college basketball, and coverage of the College World Series.  He broke the advertising barrier to cable television by signing Anheuser Busch to the largest cable TV advertising contract ever.

Jerry Milani is a freelance writer and public relations executive living in Bloomfield, N.J. He has worked in P.R. for more than 30 years in college and conference sports media relations, two agencies and for the International Fight League, a team-based mixed martial arts league, and now is the PR manager for FAN EXPO, which runs pop culture and celebrity conventions across North America. Milani is also the play-by-play announcer for Caldwell University football and basketball broadcasts. He is a proud graduate of Fordham University and when not attending a Yankees, Rams or Cougars game can be reached at Jerry (at) JerryMilani (dot) com.
@gbpackjerry
Previous Topps Gives Fans the Power to Decide Card #1 for 2017 Topps® Baseball Series One
Next The18.com Debuts New Multimedia-Focused Website