‘The Called Shot’: A Heralded Home Run In An Unheralded Season

Baseball in the 1930s feels less covered than during other decades. That could just be a feeling, but it seems like the Deadball Era, Murderer’s Row Yankees of the 1920s, DiMaggio vs. Williams battles of the 40s, New York domination of the 50s, Mantle-Maris and the 60s and future seasons have been chronicled much more often than have the ‘30s years, even though the decade boasted its own share of characters like Dizzy Dean, tragic stories like Lou Gehrig and all-time great teams like the Gas House Gang Cardinals and the dominant ‘36-39 Yankees squads.

One of baseball’s most famous moments, one shrouded in controversy with the added bonus of involving the game’s greatest personality ever, is Babe Ruth’s “called shot” home run in the 1932 World Series at Wrigley Field off the Cubs’ Charlie Root. And while that singular event has received plenty of attention in the past 90 or so years, the story of how both teams, neither the favorites entering the campaign, navigated their way through to the Fall Classic, is one worth telling, and one which Thomas Wolf delivers in The Called Shot: Babe Ruth, The Chicago Cubs, & The Unforgettable Major League Baseball Season of 1932 (University of Nebraska Press, 408 pps, $36.95). 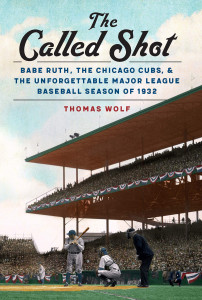 In truth, despite the title and the order in which they appear in the subtitle, the book devotes much more space to the Cubs season than that of the Yankees or the World Series, or, for that matter, the home run in question. Chicago started the year with Rogers Hornsby at the helm, and had to battle through the Hall of Famer’s off-field gambling issues and overbearing managerial ways before he was dismissed mid-season in favor of Charlie Grimm, whose more laid-back style guided a torrid two-month finish to secure the flag.

The Chicago squad, which included Hall of Famers Kiki Cuyler and Gabby Hartnett but no other real stars, had the additional hurdle of the Billy Jurges saga—the shortstop was shot by his girlfriend, the stunning Violet Popovich, in an incident that later became a central part of Bernard Malamud’s novel-turned-film The Natural. Unbelievably, Jurges missed just a few games and, though he hit just .253 with a 70 OPS+, was still a key member of the squad.

Wolf weaves the context of 1930s Chicago into the narrative well. Just as any sports season does not exist in a vacuum, the events of the 1932 pennant races blend into the Democratic and Republican National Conventions in the Windy City that summer, as well as the ruggedness of the city, which Wolf sums up as such: “In the first three decades of the twentieth century, Chicago earned a reputation for its durability and tolerance of illicit behavior. Before the city became known for its speakeasies and the murderous reign of Al Capone, it was famous for the Everleigh Club, the classiest and most successful brothel in Chicago’s rich history.” Just the kind of place that a player like Jurges might meet a debutante like Popovich.

Wolf adds plenty of color to put the reader into the scene: lemons thrown at Ruth before and during Game 3—his first appearance at Wrigley—playfully tossed back, details of Hornsby’s gambling and debts owed to his own players, and the backstories of a few attendees of the famous game (and thus witnesses to the home run as well as Ruth’s first-inning, three-run clout), which included Charlie Ireland, warden of the Anamosa (Iowa) Men’s Reformatory, who brought a felon, “Snap” Hortman, with him to the game.

There is plenty of baseball, player and game descriptions, some behind-the-scenes on the oft-repeated story of the division of playoff shares by the Cubs, whose relegation to a half-share for the former Yankee Mark Koenig supposedly riled his ex-mates, adding fuel to the rivalry. Lost in most re-tellings is that Hornsby was voted no share at all, and that though Koenig hit a robust .353 with a 136 OPS, it was in just 33 games (27 starts, during which he made 12 errors), so his contributions, while valuable, may not have merited a full share in truth.

And as for the famed fourth-inning Ruthian blast, which broke a 4-4 tie and preceded Gehrig’s shot over the wall in right in Root’s last pitch of the October 1 afternoon, there isn’t much new in a seven-page chapter which, despite the nice touch of the lemons, delivers less on that particular event than the cover might suggest. But for a read on a season and team whose story hasn’t had much attention, it’s a worthy read.

Jerry Milani is a freelance writer and public relations executive living in Bloomfield, N.J. He has worked in P.R. for more than 30 years in college and conference sports media relations, two agencies and for the International Fight League, a team-based mixed martial arts league, and now is the PR manager for FAN EXPO, which runs pop culture and celebrity conventions across North America. Milani is also the play-by-play announcer for Caldwell University football and basketball broadcasts. He is a proud graduate of Fordham University and when not attending a Yankees, Rams or Cougars game can be reached at Jerry (at) JerryMilani (dot) com.
@gbpackjerry
Previous Leading Podcast on Endurance Sport Science Launches New Channel
Next Griffey Card By Keith Shore Nears Six Figures As More Than 1,000,000 TOPPS ‘Project 2020’ Cards Sold