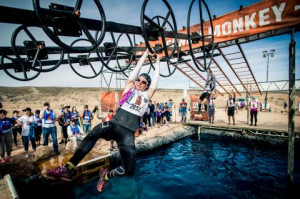 ESPN will serve as the international distributor for Tough Mudder’s global digital and linear broadcast video rights to the company’s competitive event series and original video content offerings for the 2017 and 2018 seasons. Programming includes: World’s Toughest Mudder, the culminating event of the Tough Mudder events season and one of the planet’s most gruelling 24-hour extreme endurance challenges that features more than 1,500 participants from around the world; Toughest Mudder, six, eight-hour, overnight competitive endurance races held across the globe; The Challenge Within*, five video shorts and a broadcast hour of heart-warming stories of “everyday heroes” who overcome their own mental and physical hardships by running a Tough Mudder challenge; and Mission Mudder*, a fast paced series that follows Olympic athletes as they are put through a series of Tough Mudder events.

*(The ESPN partnership excludes the rights in the UK and Ireland for Challenge Within and Mission Mudder, which are held by SKY Sports).

Building on Tough Mudder’s innovative approach to broadcasting sporting events through multimedia distribution platforms, this partnership further solidifies Tough Mudder’s position as a leader in endurance and sporting event video coverage. Since 2016, the company has expanded its media and content portfolio through partnerships with CBS Sports, Sky Sports and The CW Network.

This new partnership follows the success of Tough Mudder’s 2016 licensed events hosted in Bali and United Arab Emirates, which attracted close to 7,000 participants from more than 38 countries.

“As a leader in multi-video platform content in the sports and active lifestyle industries, we are thrilled to team with another premier leader in sports media, ESPN, to further expand our global video distribution footprint and bring Tough Mudder action and inspirational stories to hundreds of millions more people worldwide,” said Will Dean, Co-Founder and CEO of Tough Mudder, Inc. “Our new partnership with SME360 ensures that people from all walks of life around the world receive the same unparalleled event experience that has made Tough Mudder the must-do challenge for active lifestyle enthusiasts and weekend warriors alike.”

With its unique team-based obstacle course challenge once viewed as a niche extreme sports offering, Tough Mudder has proved its staying power and transformed into a worldwide brand. This year, Tough Mudder, Inc. and its licensees will host more than 130 events across nearly a dozen countries, including the United States, The United Kingdom, Germany, Australia, Dubai, Canada, China and Indonesia, welcoming participants worldwide into a global community that lives courage, personal accomplishment, teamwork and fun.

In addition to global expansion, the 2017 events season marks the first year of the company’s new competitive live event offerings including Tougher Mudder, a competitive start wave with prize money for top finishers, taking place at every Tough Mudder Full event in 2017, and Toughest Mudder, an eight-hour, overnight competitive event with more than $100,000 in prize money to be awarded over the course of the six global events

Tough Mudder is proud to partner with more than 20 of the world’s leading brands in 2017, including Merrell, who is returning for the second year as the company’s exclusive presenting partner for the Tough Mudder and Tough Mudder Half event series. Merrell joins the returning roster of companies including Jeep, Bosch, Kingstone Press and more. New partners who will unite with Tough Mudder this year include:

For more information on Tough Mudder and to see the 2017 schedule of events, visit toughmudder.com. Join the conversation on social by following Tough Mudder on Twitter at @ToughMudder, on Instagram @Tough_Mudder, on Facebook at facebook.com/toughmudder, on Snapchat at Tough.Mudder and on YouTube at YouTube.com/ToughMudder.

Jerry Milani is a freelance writer and public relations executive living in Bloomfield, N.J. He has worked in P.R. for more than 30 years in college and conference sports media relations, two agencies and for the International Fight League, a team-based mixed martial arts league, and now is the PR manager for FAN EXPO, which runs pop culture and celebrity conventions across North America. Milani is also the play-by-play announcer for Caldwell University football and basketball broadcasts. He is a proud graduate of Fordham University and when not attending a Yankees, Rams or Cougars game can be reached at Jerry (at) JerryMilani (dot) com.
@gbpackjerry
Previous Israel Victory First In Set As Topps Now™ to Feature WBC Greatest Moments Daily
Next 2017 World Baseball Classic to be broadcast in 182 countries & territories