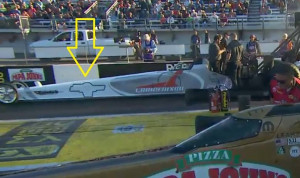 Sponsorship in auto racing of any kind is not an easy go, but in Drag Racing it can be even tougher. So what happens when a driver gets a sponsor logo removed from his car because it was objectionable? In bad taste? No. Offered up an illegal activity? Nope. Maybe it ventured into something off-key and divisive like politics? Well, kinda.

That’s what happened this past weekend with the NHRA at their Gatornationals in Gainesville, Florida, but the “ad” was actually a promotion for the fast-growing and re-launched competitor for the NHRA, the more global International Hot Rod Association (IHRA), which recently announced its return to ESPN after a long absence and continues to set itself up as a fast-growing, forward thinking racing body.

According to those on hand and several website posts, three-time world champion Larry Dixon was asked to remove a sponsor logo because it promoted an event at a non-NHRA track, even though it was on a weekend when the NHRA wasn’t event racing (the 64th annual World Series of Drag Racing at Cordova, Illinois which takes place Aug. 25-27). The move created quite a stir just minutes before racing was to begin, and went from the highly respected and popular driver first trying to duct tape across the logo, and then peeling the logo off the car with a huge outline replacing the spot where the logo as supposed to have been.

The result did not sit well with fans or in the social media world, and inadvertently got the revamped IHRA more exposure than they probably would have gotten away from the track on a weekend in March. “Competition is key to drive success in any business, and in sports you always want an Avis to fuel your Hertz,” said longtime sports marketer and professor at Columbia University Ray Katz. 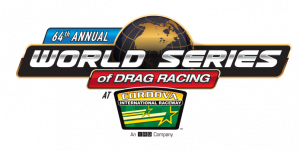 “In this case if I’m the IHRA, with people like (longtime sports executive) Chris Lencheski and (former head of CBS Sports and veteran media consultant) Neal Pilson involved I’m pretty happy with the exposure because it tips the cards of their potential rival that they are on the radar,” he added. “Most times when there are not big dollars involved with a conflict these things go by the boards. To pick a fight with something like this in a sport that is scrambling to get support, and with a name driver who you need to help grow the sport, is pretty questionable for the NHRA.”

Competition in any form of racing is always healthy, and it seems like things are continuing to heat up, from NASCAR drivers getting into some shoving last week in Las Vegas to Formula 1 under Chase Carey pushing into the US more and Indy Car’s continued uphill battle. A little fuel for the big fuel dragsters on the racing circuit? That’s probably a good thing as well, and it’s always a good sign when people outside of the core are talking about your business. Score one for Drag Racing, even more so with march Madness and the WBC drawing most of the eyeballs in mid-March.

Jerry Milani is a freelance writer and public relations executive living in Bloomfield, N.J. He has worked in P.R. for more than 30 years in college and conference sports media relations, two agencies and for the International Fight League, a team-based mixed martial arts league, and now is the PR manager for FAN EXPO, which runs pop culture and celebrity conventions across North America. Milani is also the play-by-play announcer for Caldwell University football and basketball broadcasts. He is a proud graduate of Fordham University and when not attending a Yankees, Rams or Cougars game can be reached at Jerry (at) JerryMilani (dot) com.
@gbpackjerry
Previous Brent Musburger Will Receive Lifetime Achievement Award
Next Cubs Wins Keep Extending Into The Social Space