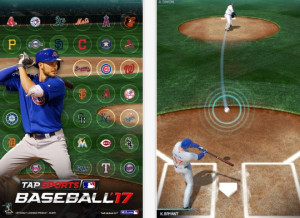 Coming off of an incredible 2016 season, and for the second year in a row, the Tap Sports Baseball franchise will feature the likeness of the 25-year-old Bryant. The second overall pick in 2013, Bryant has quickly emerged as a top talent and fan-favorite. He made his MLB debut in 2015 where he would go on to earn the Jackie Robinson National League Rookie of the Year award. In 2016, Bryant helped lead the Cubs to a World Series championship and was named the National League Most Valuable Player.

“I’m a huge fan of MLB Tap Sports Baseball; that’s why I’m excited to return as the game’s featured player,” said Kris Bryant. “The game is true to the sport of baseball and perfect to play when I have a free minute on the road!”

“The Tap Sports Baseball franchise has achieved consistent year-over-year growth for Glu and we couldn’t be more excited for the user response to our partnerships with MLB, MLBPA and MLBPAA,” said Glu President and CEO Nick Earl. “Led by a team with the freedom to collaborate and a genuine love for the game, we’re proud to deliver a visually stunning, competitive, and deeply social gameplay experience.”

“We’re thrilled with Glu’s continued development of the Tap Sports Baseball franchise and know our fans will just love to play the new release as another way to engage with their favorite teams and players,” said Jamie Leece, Vice President of Games and VR for MLBAM.

“We’re looking forward to the release of MLB Tap Sports Baseball 2017, as Glu Mobile continues to develop a fun and easy-to-play game that allows fans from around the world another way to engage with their favorite players and the sport of baseball anywhere and at any time,” said Evan Kaplan, Director, Licensing & Business Development for the MLBPA.

Jerry Milani is a freelance writer and public relations executive living in Bloomfield, N.J. He has worked in P.R. for more than 30 years in college and conference sports media relations, two agencies and for the International Fight League, a team-based mixed martial arts league, and now is the PR manager for FAN EXPO, which runs pop culture and celebrity conventions across North America. Milani is also the play-by-play announcer for Caldwell University football and basketball broadcasts. He is a proud graduate of Fordham University and when not attending a Yankees, Rams or Cougars game can be reached at Jerry (at) JerryMilani (dot) com.
@gbpackjerry
Previous IIHF Women’s World Championship Starts Friday; Streaming on NHL.com
Next L.A. Rams Subject of Season 2 Of Amazon’s ‘All or Nothing’