L.A. Rams Subject of Season 2 Of Amazon’s ‘All or Nothing’ 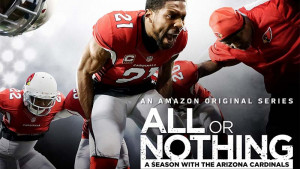 Amazon has announced it has greenlit season two of the Emmy-nominated All or Nothing, an Amazon Original Series produced by NFL Films. This season of All or Nothing will give Amazon Prime members access to an NFL season unlike any that’s been captured on screen. Customers will get to see the Rams’ entire 2016 season, which began with their relocation back to Los Angeles and culminated with the hiring of a new head coach and preparations for the 2017 season.

“All or Nothing brings Amazon Prime members a deep dive into the lives of professional athletes,” said Conrad Riggs, Head of Unscripted, Amazon Originals. “We are excited to highlight the LA Rams in season two, a team with a compelling story of relocation, rebuilding and reuniting with the city they once again call home.”

“NFL Films proved again that they’re the best in the business with the groundbreaking new franchise, All or Nothing, whose inaugural season profiling the 2015 Arizona Cardinals was the highest-rated original series ever on Amazon Prime Video,” said Jordan Levin, Chief Content Officer, NFL Media. “Chronicling the return of the Rams to Los Angeles provides an unbelievably unique backdrop to season two and one which provides NFL fans and viewers around the world rare insight into a team overcoming an extraordinary set of circumstances to build their future.”

“Since bringing pro football back to the Los Angeles region last year after a 21-year absence, we have been committed to giving NFL fans an up-close view of our journey,” said Rams EVP of Football Operations and Chief Operating Officer Kevin Demoff. “We are pleased that NFL Films captured this important chapter in the NFL’s history and are looking forward to working with Amazon to bring this behind-the-scenes look at our team to their customers.”

The first season of All or Nothing, which followed the Arizona Cardinals throughout the 2015 season, currently has an average customer rating of 4.8, with 89% 5 star reviews, making it the highest-rated non-kids Amazon Original Series on Prime Video. Customers can now watch 28 exclusive behind-the-scenes clips from season one by accessing the X-Ray feature on Amazon Fire TV, Fire TV Stick, Fire tablets and +3P Android mobile devices.

Produced by NFL Films, All or Nothing: A Season with the Los Angeles Rams is executive produced by Ross Ketover (Hard Knocks, Inside the NFL), and Pat Kelleher (Hard Knocks, 30 for 30 – Four Falls of Buffalo). The showrunner is Keith Cossrow (A Football Life). Directors are Shannon Furman and Pat Harris. Supervising producer is Bennett Viseltear and senior producer is Nick Mascolo.

Jerry Milani is a freelance writer and public relations executive living in Bloomfield, N.J. He has worked in P.R. for more than 30 years in college and conference sports media relations, two agencies and for the International Fight League, a team-based mixed martial arts league, and now is the PR manager for FAN EXPO, which runs pop culture and celebrity conventions across North America. Milani is also the play-by-play announcer for Caldwell University football and basketball broadcasts. He is a proud graduate of Fordham University and when not attending a Yankees, Rams or Cougars game can be reached at Jerry (at) JerryMilani (dot) com.
@gbpackjerry
Previous Glu Launches MLB Tap Sports Baseball 2017 Featuring NL MVP Kris Bryant
Next Nielsen Launches National Out-of-Home Reporting Service with ESPN as First Client