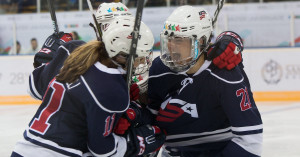 The 2017 IIHF Women’s World Championship begins Friday (March 31) at USA Hockey Arena in the Detroit suburb of Plymouth, Michigan, with athletes from the top eight nations in the world competing for the gold medal.

Tickets to all games in the tournament, which is being staged in the U.S. for just the fourth time, are available online at 2017WomensWorlds.com or in person at the USA Hockey Arena box office.

Team USA has won the last three gold medals in the event and six of the last seven titles. The U.S. opens tournament play against arch-rival Canada Friday at 7:30 p.m. ET.

“It’s great to welcome the world to our country for the Women’s World Championship,” said Dave Ogrean, executive director of USA Hockey. “While it’s always special to host, this year is particularly unique for fans as they’ll get to see the same players they’ll watch in 10 months during the Winter Olympics, in person at USA Hockey Arena.”

Jerry Milani is a freelance writer and public relations executive living in Bloomfield, N.J. He has worked in P.R. for more than 30 years in college and conference sports media relations, two agencies and for the International Fight League, a team-based mixed martial arts league, and now is the PR manager for FAN EXPO, which runs pop culture and celebrity conventions across North America. Milani is also the play-by-play announcer for Caldwell University football and basketball broadcasts. He is a proud graduate of Fordham University and when not attending a Yankees, Rams or Cougars game can be reached at Jerry (at) JerryMilani (dot) com.
@gbpackjerry
Previous Appel Spins Another Gem With ‘Stengel’
Next Glu Launches MLB Tap Sports Baseball 2017 Featuring NL MVP Kris Bryant