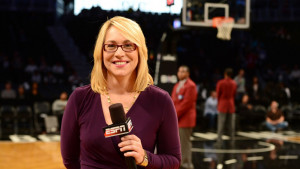 Two noted broadcasters, Doris Burke of ESPN and Amy Trask of CBS Sports Network, have been named finalists for the 2017 Women in Sports and Events (WISE) Women of the Year Award. It will be presented to three women at the 23rd Annual WISE Women of the Year Awards Luncheon on June 22, 2017 at the Marriott Marquis Hotel in New York City.

Trask is a barrier-breaker in the front office and in front of the camera. She joined CBS Sports Network in 2013 as a studio analyst on That Other Pregame Show and serves as a panelist on We Need to Talk, the first-ever nationally televised all-female sports show. She also contributes to The NFL Today on CBS.

The final ballot has been issued to all WISE members for a national vote, which closes at 10 p.m. ET on Friday, December 23, 2016.

Jerry Milani is a freelance writer and public relations executive living in Bloomfield, N.J. He has worked in P.R. for more than 30 years in college and conference sports media relations, two agencies and for the International Fight League, a team-based mixed martial arts league, and now is the PR manager for FAN EXPO, which runs pop culture and celebrity conventions across North America. Milani is also the play-by-play announcer for Caldwell University football and basketball broadcasts. He is a proud graduate of Fordham University and when not attending a Yankees, Rams or Cougars game can be reached at Jerry (at) JerryMilani (dot) com.
@gbpackjerry
Previous HSBC World Rugby Women’s Sevens Series Returns to Las Vegas
Next WHOOP Announces Findings of Largest Performance Study Ever Conducted in Professional Sports