Appel Spins Another Gem With ‘Stengel’ 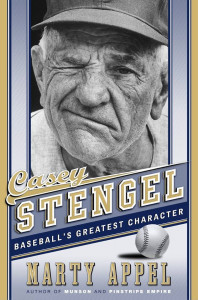 When Charles Dillon “Casey” Stengel was inducted into the National Baseball Hall of Fame in 1966, author Marty Appel surmises, he likely “played with or against or managed more” fellow Hall of Famers than any of the then-100+ enshrinees. Having been born before Babe Ruth, started his playing career in the deadball era among stars like Honus Wagner and Christy Mathewson and managed into the time of Hank Aaron, Willie Mays (and even the start of the careers of Joe Torre and Tony Perez) Stengel might still be able to claim that distinction.

But Stengel’s career is legendary for considerably more than just its longevity. He made it through five NL teams during his playing career, developing a not totally undeserved reputation as a clownish figure, though he had flashes of success along the way. Those perceptions of him stayed with Stengel as he had less than successful stints—saddled with mostly less than talented rosters—in managerial stops in Brooklyn and Boston from 1934-43 (excluding 1937, one of his only two years out of baseball from 1910-1965), his teams never finishing higher than fifth.

But behind that unusual personality and ability to draw attention and fans was a great baseball mind, one that in many ways was quite ahead of its time. And while Stengel is more remembered for the quasi-logical “Stengelese” with which he attempted to communicate, Appel in his new biography Casey Stengel: Baseball’s Greatest Character” (Doubleday, 410 pps., $27.95), traces his career in great detail, sharing the many stories and high acumen—in both baseball and business—that made him unique in the baseball world.

With the approach of always portraying Stengel not as a clown but a baseball “lifer,” Appel traces the Kansas City, Mo., native’s career from his relatively rapid rise to a 14-year career in the majors, through player manager stints in Worcester and Toledo before those first managerial jobs, a rebirth in the PCL with Oakland—where he and wife, Edna, were happy and could have likely managed for years to come—and finally his career-defining time with the Yankees and Mets.

And while there have been a few works on “The Old Perfessor’s” life, Robert W. Creamer’s Stengel was published in 1984, making Appel’s timing good for a fresh look at the life of, as he notes, the greatest “Character of the Game,” as selected by MLB Network in 2009. The great known stories are there, including the bird-in-hat trick of 1918, replicated at Dodger Stadium nearly 60 years later, pronouncement that he’d “never make the mistake of turning 70” again in the wake of his dismissal by the Yankees after the 1960 season, and famously rambling—many say crazy-like-a-fox) testimony before the Senate Judiciary Committee’s Subcommittee on Anti-Trust and Monopoly.

But as in the author’s deeper dives into Yankee lore like Munson: The Live and Death of a Yankee Captain and Pinstripe Empire, Appel brings out a more complete picture of Stengel, gleaned from unpublished memoirs of Edna and longtime Yankee Frankie Crosetti, as well as numerous interviews with key figures in his life, including Bob Case, who managed Stengel’s affairs in his later years, players like Bobby Richardson, Tracy Stallard and Bill Wakefield and others. Stengel’s success in Texas oil and other businesses set him and Edna up for life financially, an element of his life of which many readers may not be aware.

And while all of Casey’s sense of humor and fun-loving persona are captured—even the full transcript of his Congressional testimony is included—what comes through Casey Stengel is a highly readable study of a man who for a time was the most famous man in baseball and, now forty years after his death, still one of its most memorable.

Jerry Milani is a freelance writer and public relations executive living in Bloomfield, N.J. He has worked in P.R. for more than 30 years in college and conference sports media relations, two agencies and for the International Fight League, a team-based mixed martial arts league, and now is the PR manager for FAN EXPO, which runs pop culture and celebrity conventions across North America. Milani is also the play-by-play announcer for Caldwell University football and basketball broadcasts. He is a proud graduate of Fordham University and when not attending a Yankees, Rams or Cougars game can be reached at Jerry (at) JerryMilani (dot) com.
@gbpackjerry
Previous Cubs Wins Keep Extending Into The Social Space
Next IIHF Women’s World Championship Starts Friday; Streaming on NHL.com