Branson, Wittenberg And Fun And Games… 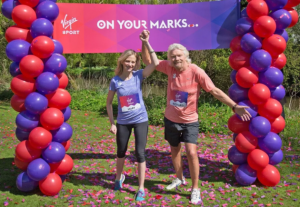 Even Sir Richard Branson is getting into eSports? Well sorta.

On Thursday Branson and Virgin Sport Mary Wittenberg formally kicked off their first U.S. event push in San Francisco, with a press event to get Virgin Sports San Francisco off and running, and the former New York Roadrunners CEO hinted that the sports and lifestyle festival will also include an element of eSports and gaming down the road as a way to engage young people, maybe even while their parents and siblings are out doing lots of activities and running the hills of the Bay Area.

Virgin Sport San Francisco will be October 13-15 and will be a low stress family-friendly event that includes a half-marathon and other fitness-related activities matched with local food, drink, and entertainment. The idea came about a few years back, when Branson and co-founder Freddie Andrewes came up with an event that  “combines the sweat of sport with the swagger of Virgin,” and Virgin Sport ultimately became the result. The company did its first event in London last year, and with Wittenberg, who led the build to make the New York City Marathon into a global business and entertainment phenomenon, at the helm, will expand with a series of events across the U.S., each tied to a bigger picture of health and wellness, not all focused on running. .

“Our whole purpose at Virgin Sport is to help people move to their best and healthiest lives,” she said Thursday on a conference call with reporters. “We just want to help people take on dreams, overcome challenges, and wrap it in a lot of fun.”

Part of that fun, she admitted, would involve using all forms of technology to make sure events are inclusive across generations, hence the eSports news.  “My team may not be aware I am saying this, but we will look to include eSports into what we are doing. We want to help marry the enthrallment kids have with tech and eSports with some of the fitness side, and put it in a broader mix of festivals,” she added. While having game consoles with league of Legends players may not be the exact fit, there are tons of ways mobile gaming could be included in fitness festivals. Incenting young people to move off of a sedentary lifestyle by being inclusive as opposed to exclusive is not a bad thing, and Branson has never been one to shy away from new ideas.

The festival has already brought on ASICS, a former marathon partner, as a sponsor, and will probably see other brands moving over as well, along with a host of non-endemic categories that may want to join Sir Richard on his run, or game, or bike ride.

While no other U.S. dates have been announced past October, Virgin doesn’t do anything small. Gamers, get ready to move.

Jerry Milani is a freelance writer and public relations executive living in Bloomfield, N.J. He has worked in P.R. for more than 30 years in college and conference sports media relations, two agencies and for the International Fight League, a team-based mixed martial arts league, and now is the PR manager for FAN EXPO, which runs pop culture and celebrity conventions across North America. Milani is also the play-by-play announcer for Caldwell University football and basketball broadcasts. He is a proud graduate of Fordham University and when not attending a Yankees, Rams or Cougars game can be reached at Jerry (at) JerryMilani (dot) com.
@gbpackjerry
Previous Topps Now To Offer Special Jeter Card on Monday
Next Beat The Streets Wrestling Presents Annual Awards At Annual Benefit; $1.2 Million Raised