Is New Sevens Rugby League Built For A Milennial Audience?

Jerry Milani May 30, 2017 News Comments Off on Is New Sevens Rugby League Built For A Milennial Audience? 2,016 Views 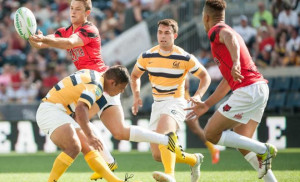 For several years we have heard about the horse race between rugby and lacrosse as the fastest growing team sports in the U.S. Lacrosse has its pro indoor and outdoor leagues and its massive audience for the NCAA Final Four; rugby has the Olympics and the occasional visits from the vaunted All Blacks which draw large crowds, as well as the highly successful HSBC Sevens which gets over 70,000 global fast to Las Vegas every year. Last summer rugby 15’s even tried its own professional league, called PRO Rugby, which fizzled quickly.

Now however a hybrid form of sevens appears ready to make a run, as the collegiate championships, the Penn Mutual CRC, gets going in Philadelphia this coming weekend.

The new venture is called the North American Super 7’s Rugby League, with free substitution, no ties, four 15 minute quarters and boasting of American players to fill its rosters when it formally launches in 2019 after a six city test tour next summer.

North American Super 7’s is the brainchild and passion project of Jon Prusmack, a self-made New York businessman who has helped fund and fueled the most successful ventures in rugby in the United States with his company United World Sports. The launch of the league, originally tested as a viable media product three years ago, is proof of concept that the U.S. casual sports fan will like rugby if it is fast paced and homegrown; think of the NASL ideas of the 1970’s that probably grew too fast. This will be cost controlled, according to officials, and can help maximize the grassroots growth that rugby has now, much like soccer did when MLS launched a few decades ago.

“We are very pleased to be able to finally announce our plan of launching what is a very fast paced, exciting league for Rugby Sevens here in North America, and we are even more excited to have David Niu at the helm,” said Prusmack in a release.

As for now there are no set cities or dates, and media partners are being discussed for a format that could fit milennials as well as traditional fans of rugby. It can also fit in a window where contact sports enthusiast have always wanted spring football to go, with this high octane sport being an alternative, and one that can build toward inclusion again in the Olympics, this time in Tokyo for 2020.

Who will play? Officials think that the stories and talent at American schools, along with expats playing on club teams could fill the void. Then there are the players who might have played football on various levels, especially at skills positions, who can’t make or might not be interested in the bench of the NFL. Think Tim Tebow types a few years forward. Whether the media interest, the crowds and the money will help balance the grassroots remains to be seen, but a global sport with an American twist is an intriguing way to go, and it looks like North American Super 7’s may be first in as a business for a sport known for its grittiness and athleticism, at least on colleges and in key outposts around the world.

Jerry Milani is a freelance writer and public relations executive living in Bloomfield, N.J. He has worked in P.R. for more than 30 years in college and conference sports media relations, two agencies and for the International Fight League, a team-based mixed martial arts league, and now is the PR manager for FAN EXPO, which runs pop culture and celebrity conventions across North America. Milani is also the play-by-play announcer for Caldwell University football and basketball broadcasts. He is a proud graduate of Fordham University and when not attending a Yankees, Rams or Cougars game can be reached at Jerry (at) JerryMilani (dot) com.
@gbpackjerry
Previous Beat The Streets Wrestling Presents Annual Awards At Annual Benefit; $1.2 Million Raised
Next ESPN & USA Ultimate Reach Multi-Year Deal