Home / Book Reviews / A ‘Heavenly’ Fantasy Baseball Contest, For All The World

A ‘Heavenly’ Fantasy Baseball Contest, For All The World

Jerry Milani November 14, 2017 Book Reviews, News Comments Off on A ‘Heavenly’ Fantasy Baseball Contest, For All The World 2,180 Views 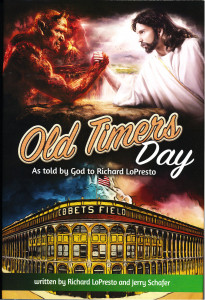 Fantasy sports may be all the rage on earth, but what if the result of a single baseball game, whose teams are comprised of players selected by God and the Devil themselves, from among anyone ever to play in the Majors or Negro Leagues, would determine the fate of the everyone on the planet? Or at least the non-athiests?

That is the heavenly premise of Richard LoPresto’s Old Timer’s Day (2017, Celestial Baseball Association, 178 pps.), which fans of baseball history and the sport’s legendary stars will find particularly delightful.

LoPresto, as the lone human able to view the game, “reports” on the contest, from the draft of more than 50 players per side by God (referred to most often in the narrative as “Abba”) and Satan, to the practices held the day before, to the game itself—a winner-take-all battle in which the loser will be vanquished and forgotten. Vegas has never seen such stakes.

The “draft” is colored with tidbits on the players and managers selected, many of whom are Hall of Famers familiar to die-hard fans but are nonetheless of interest, particularly the lesser-known selections like “Dummy” Hoy, Hal Chase, Moe Berg and others. Satan’s “Old Timer’s” vs. Abba’s “Central Christian Angels” squad, a nod to the Church where LoPresto was inspired and behind which the game takes place. C. Montgomery Burns, in the famous “Simpsons” softball episode, couldn’t have selected a more talented squad of early stars.

But this is a game pitting the best of the best, and while the selections may not have always fit the expected (noted do-gooders Walter Johnson, Christy Mathewson and Bill Dickey on Satan’s team; baseball “outsider” Shoeless Joe Jackson on Abba’s outfit), there was a principle to the two-at-a-time selection process: Satan would select no African Americans, a decided disadvantage though the teams on paper seemed fairly even. Players on both teams range from the earliest dead-ball stars like Cap Anson and Ty Cobb to modern-day standouts Mike Trout and Clayton Kershaw. (Will Kershaw’s post-season woes show up here? Is this even the post-season?).

The game play-by-play is thorough, and perhaps more limited rosters would make it flow a bit better (pitching changes and long innings are not just the domain of the 2017 World Series, apparently); nonetheless it captures the excitement of a contest that true fans could only dream of. Or recreate in Strat-O-Matic, the tabletop game that gets a few mentions in the narrative.

The less-devout needn’t worry about preachiness; this isn’t a spiritual tome dressed up as a baseball novel. It’s more a trip into a fantasy that baseball fans may have imagined in one form or another themselves.

All that’s missing is Joe Hardy.

Jerry Milani is a freelance writer and public relations executive living in Bloomfield, N.J. He has worked in P.R. for more than 30 years in college and conference sports media relations, two agencies and for the International Fight League, a team-based mixed martial arts league, and now is the PR manager for FAN EXPO, which runs pop culture and celebrity conventions across North America. Milani is also the play-by-play announcer for Caldwell University football and basketball broadcasts. He is a proud graduate of Fordham University and when not attending a Yankees, Rams or Cougars game can be reached at Jerry (at) JerryMilani (dot) com.
@gbpackjerry
Previous New York’s Paley Center To Host ‘100 Years of the NHL’
Next Lou Gehrig Signed Yankees Contract Bidding At $110,000