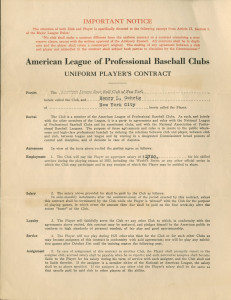 The Lou Gehrig Signed New York Yankees Uniform Players Contract from 1925 is the current high bid of $110,000 on the Steiner Auctions “Fall Classic” on-line auction which concludes this Saturday.
The first page of the 92-year old artifact reads “ American League of Professional Baseball Clubs Uniform Players Contract” and features the player’s name, Henry L. Gehrig of “New York City” typed on the front of the artifact. The interior of the artifact features a signature of Jacob Ruppertthat was executed by Ed Barrow, the President of the New York Yankees.
Another featured collectible is Aaron Judge’s Game Used No. 99 Home Uniform Jersey from September 30, 2017 when he broke Babe Ruth’s 96-year record for most Home Runs at Yankee Stadium currently has a high-bid of $31,390.
Seventy years after his passing, an Official American League baseball signed by Babe Ruth inscribed to “Troop 6 Larchmont Boy Scouts from Babe Ruth” is on the Steiner Auctions block, and a generous portion of the final sales price will be donated to the Boy Scouts by consigner Jack Coughlin. The current bid for the ball is $3,808.
Last July, the uniform jersey worn by Aaron Judge in the Yankee rookie’s debut game, which fetched a high bid of $160,644.05, was the top seller in Steiner Auctions’ Mid-Summer Classic on-line auction which concluded Saturday (July 29). A total of more than $1 million in winning bids was collected on 1,006 memorabilia pieces.
Collectors interested in consigning memorabilia to the next Steiner auction may call 914-307-1058 or email auction@steinersports.com.
auction baseball gehrig ruth steiner sports 2017-11-15
Jerry Milani
Share

Jerry Milani is a freelance writer and public relations executive living in Bloomfield, N.J. He has worked in P.R. for more than 30 years in college and conference sports media relations, two agencies and for the International Fight League, a team-based mixed martial arts league, and now is the PR manager for FAN EXPO, which runs pop culture and celebrity conventions across North America. Milani is also the play-by-play announcer for Caldwell University football and basketball broadcasts. He is a proud graduate of Fordham University and when not attending a Yankees, Rams or Cougars game can be reached at Jerry (at) JerryMilani (dot) com.
@gbpackjerry
Previous A ‘Heavenly’ Fantasy Baseball Contest, For All The World
Next New Study Reveals Big Ten is Most Spirited Conference in NCAA Football