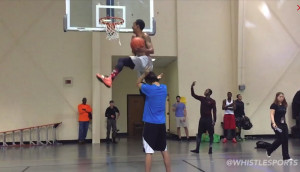 Every Tuesday starting December 5th and running through January 23rd, Dunk League will air regional competitions in Los Angeles and Miami and its main competition in New York City in search of the nation’s next great dunker. Winners from each regional competition will join season one’s defending champion Guy “The Frequent Flyer” Dupuy to battle for $50,000 and the Dunk League golden rim trophy.

“Opening this show up to regional qualifiers will enable us to discover the next generation of dunkers,” said Jeff Urban, co-founder and president, Whistle Sports.

“Building upon the success of Dunk League season one, we continue to focus on finding the greatest dunkers in the world and telling their stories. With season two, we’re taking dunking to the next level and helping to establish it as its own sport – athletes today are now training to specifically become dunkers, and not just basketball players,” said J. LaLonde, vice president of content, Whistle Sports.

Jerry Milani is a freelance writer and public relations executive living in Bloomfield, N.J. He has worked in P.R. for more than 30 years in college and conference sports media relations, two agencies and for the International Fight League, a team-based mixed martial arts league, and now is the PR manager for FAN EXPO, which runs pop culture and celebrity conventions across North America. Milani is also the play-by-play announcer for Caldwell University football and basketball broadcasts. He is a proud graduate of Fordham University and when not attending a Yankees, Rams or Cougars game can be reached at Jerry (at) JerryMilani (dot) com.
@gbpackjerry
Previous SEC and SiriusXM to Launch SiriusXM SEC Radio
Next Female Football Champion Creates Card Game