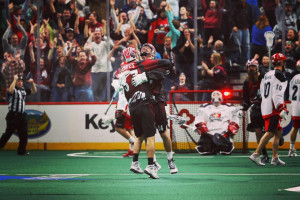 The National Lacrosse League (@NLL), the largest and most successful professional lacrosse league in North America, will kick off their 32nd season on Friday, December 8th amidst unprecedented growth and business interest, and great hope for additional expansion across the United States for the country’s fastest growing team sport.

“This will be a landmark year for the league, its partners, its leadership and most importantly its athletes, coaches and fans,” said NLL Commissioner Nick Sakiewicz (@NLLcommish). “The interest in all we are doing; from our digital first stance to our careful but aggressive expansion plans to our amazing community programs designed to grow the game for all have created buzz around the NLL that hasn’t been seen before, and we are excited to continue to make news in the coming months as pro lacrosse, especially the exciting indoor game, moves to a level never before seen.”

Sakiewicz is now in his second year at the NLL helm after a long career in professional soccer, which included twice winning MLS Executive of the Year.

The 2017-18 season will begin on December 8 with the defending champion Georgia Swarm visiting the New England Blackwolves, the Toronto Rock visiting the Buffalo Bandits, and the Colorado Mammoth visiting the Vancouver Stealth. On Saturday, December 9, the Calgary Roughnecks will visit the Rochester Knighthawks to complete opening weekend. All games will be shown on NLL TV, the league’s award winning digital platform and CBS Sports Digital, with the Toronto vs. Buffalo matchup featured as the NLL Game of the Week livestreamed on Twitter.

The offseason has already been one of the busiest in NLL history, with two franchises already on board for 2018-19; the San Diego Seals (owned by Alibaba co-founder Joe Tsai) and the Philadelphia Wings (owned by Comcast Spectacor).

The response by new partners to joining the fast-rising group has been impressive, with the NLL targeting key geographic areas that have seen a huge growth not just in lacrosse, but in indoor (box lacrosse) at the grassroots, high school and even collegiate level. Those areas that have been targeted as expansion markets include the Washington/Baltimore corridor, the New York metropolitan area, the San Francisco/San Jose area, and Dallas, Texas.

Among the key measuring sticks for growth going into the season are:

HOME GROWN GROWTH: More and more of the League’s players are familiar to U.S. audiences with 55% of roster players coming from American colleges. The season-opening rosters will have no less than 21 Native American athletes as well, more than all other North American sports COMBINED.

FILLING THE HOUSE:  NLL attendance continues to grow, with preseason attendance this year up almost 20%, with a preseason record crowd of 12,857 in Calgary two weeks ago.  The League’s average attendance last year of almost 7,500 per match trailed only that of the NBA and NHL in terms of professional indoor sports – beating out indoor soccer, indoor football and the WNBA. It marked the third straight season of attendance growth, directly relating to a 12% increase in net box office receipts in 2017.

INCREASED REVENUE:  The NLL’s revenues grew by an impressive 11% last year. Key in that growth was the emergence of NLL TV, new league-wide sponsorships and increased ticket sales.

OVERALL GROWTH IN LACROSSE: The NLL success has been a key narrative in the overall growth of lacrosse again this year. The sport has seen 12 consecutive years of impressive growth with numbers increasing by at least 20,000 participants each year. The NCAA has seen an uptick of 33% in the number of teams playing the sport over the last five years while there’s been a comparable increase of 27% on the high school level.

For more information about the National Lacrosse League, visit NLL.com.

Jerry Milani is a freelance writer and public relations executive living in Bloomfield, N.J. He has worked in P.R. for more than 30 years in college and conference sports media relations, two agencies and for the International Fight League, a team-based mixed martial arts league, and now is the PR manager for FAN EXPO, which runs pop culture and celebrity conventions across North America. Milani is also the play-by-play announcer for Caldwell University football and basketball broadcasts. He is a proud graduate of Fordham University and when not attending a Yankees, Rams or Cougars game can be reached at Jerry (at) JerryMilani (dot) com.
@gbpackjerry
Previous New York Rangers Favorite Nick Fotiu To Host Viewing Party at Dan Rooney’s Sports Bar at Empire City Casino on Friday
Next Jackson, Mayfield Pace Social Presence Among Heisman Candidates