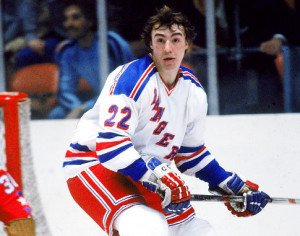 Fotiu will meet and greet fans, sign autographs and take photos beginning at 6:30 p.m. The first native New Yorker to play for the Rangers will watch the pivotal Eastern Conference Atlantic Division match up with faithful fans. Opening face off in Washington is at 7:00 p.m.

Dan Rooney’s features over 40 large screen TVs with upscale pub food and cold brews available for purchase. Along with food and drink specials, a Rangers trivia contest will be held, as well as giveaways, including two tickets to a Rangers game.

Empire City is providing round trip bus service from Madison Square Garden. Those interested should email empirecitycasinoviewingparty@msg.com to reserve their spot.

About Nick Fotiu: signed with his hometown Rangers in 1976, and endeared himself to fans in his role as an enforcer. He played with the Rangers until 1979, when he was claimed by the Hartford Whalers in the NHL Expansion Draft. Fotiu was traded back to the Rangers in 1980, and was with the team for five more seasons.

Jerry Milani is a freelance writer and public relations executive living in Bloomfield, N.J. He has worked in P.R. for more than 30 years in college and conference sports media relations, two agencies and for the International Fight League, a team-based mixed martial arts league, and now is the PR manager for FAN EXPO, which runs pop culture and celebrity conventions across North America. Milani is also the play-by-play announcer for Caldwell University football and basketball broadcasts. He is a proud graduate of Fordham University and when not attending a Yankees, Rams or Cougars game can be reached at Jerry (at) JerryMilani (dot) com.
@gbpackjerry
Previous National Lacrosse League Announces the Addition of Joel Feld
Next National Lacrosse League (@NLL) Faces Off With 32nd Season Amidst Great Business Momentum, Expansion