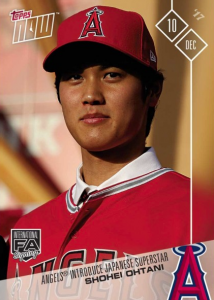 The excitement of Shohei Ohtani coming to MLB has already been captured onto collectibles. Topps issued one of the first items featuring Ohtani with a TOPPS NOW® trading card announcing his signing with the Los Angeles Angels.

Ohtani was a much sought after player from Japan. While he is known for his pitching – he had 624 strikeouts in 543 career innings in Japan – he is also quite the hitter, making him a hot commodity this offseason. Over the last two seasons in Japan, Ohtani hit .326 with 30 home runs and 98 RBI in 169 games.

Jerry Milani is a freelance writer and public relations executive living in Bloomfield, N.J. He has worked in P.R. for more than 30 years in college and conference sports media relations, two agencies and for the International Fight League, a team-based mixed martial arts league, and now is the PR manager for FAN EXPO, which runs pop culture and celebrity conventions across North America. Milani is also the play-by-play announcer for Caldwell University football and basketball broadcasts. He is a proud graduate of Fordham University and when not attending a Yankees, Rams or Cougars game can be reached at Jerry (at) JerryMilani (dot) com.
@gbpackjerry
Previous AVP, Amazon Find A Broadcast Fit
Next SiriusXM To Launch ACC, Pac-12 Channels