Jerry Milani May 30, 2019 News, On The Air Comments Off on Football streaming platform MyCujoo signs multi-year partnership with CONIFA 1,010 Views 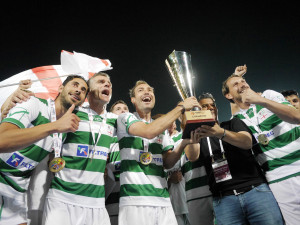 CONIFA is the international governing body for football associations in states, minorities, stateless peoples and regions unaffiliated with FIFA. The partnership – which runs until 2020 – comes after MyCujoo streamed a number of matches of the 2018 CONIFA World Football Cup, held in London. The deal, which is based on a shared revenue agreement, includes exclusive digital media rights to stream the competition (exempt from the host location) and competition data rights.

The first tournament MyCujoo will broadcast in full is CONIFA sportsbet.io European Football Cup 2019, which runs from 1-9 June. This third edition of the tournament takes place in Artsakh, the  Armenian-populated region of Nagorno Karabakh that declared its independence from Azerbaijan unilaterally in 1991. The eight sides competing the tournament are:

Amsterdam-based MyCujoo is transforming the football broadcast market by providing rights-holders like CONIFA with top-quality broadcasting technology without fees or subscriptions.

MyCujoo offers viewers anywhere in the world unlimited football content, while enabling players and fans to take an active, creative role in content creation and distribution. Players of all levels are able to tag themselves in recordings,  produce their own highlights reels and share these socially with whomever they choose, creating the largest football community network.

MyCujoo CEO, Pedro Presa, said, “We like to think that MyCujoo is the natural home for an organisation like CONIFA.  Our vision is to create a network of football players and football fans where everyone belongs – no matter where they are or where the come from. People talk a lot about football being a common language but at MyCujoo, we are doing something about it. We’re building the infrastructure which a community like CONIFA and its members need.”

Sascha Duerköp, General Secretary of CONIFA, said, “It’s fantastic news that we are able to work with MyCujoo on this basis going forward. Their support during the 2018 World Football Cup was invaluable and we’re really happy to be taking our partnership into the next tournaments with them. Mycujoo allows everyone to watch football, wherever they are in the world, and that really fits in with CONIFA’s ethos.”

2019 is proving to be a year of exceptional growth for MyCujoo as it continues to expand its unparalleled global football content portfolio. In the last month alone MyCujoo has signed deals in the United States with the National Premier Soccer League and with the CBF in Brazil. The CBF deal includes exclusive, worldwide digital rights for several key Brazilian competitions, including Brasileirão Série D, U23, U20 and U17 league and cup matches, and the Feminino Serie A and B.

This year also has seen multi-year content partnerships with the Oceania Football Confederation, Malaysia Football League and Japan Women’s Football League, and a product evolution focusing on activating the community of football players featured on the platform.

Jerry Milani is a freelance writer and public relations executive living in Bloomfield, N.J. He has worked in P.R. for more than 30 years in college and conference sports media relations, two agencies and for the International Fight League, a team-based mixed martial arts league, and now is the PR manager for FAN EXPO, which runs pop culture and celebrity conventions across North America. Milani is also the play-by-play announcer for Caldwell University football and basketball broadcasts. He is a proud graduate of Fordham University and when not attending a Yankees, Rams or Cougars game can be reached at Jerry (at) JerryMilani (dot) com.
@gbpackjerry
Previous World Armwrestling League (WAL) Aligns With Strategic Broadcast Partners
Next Documentary Captures Elusive Baseball ‘Spy’ Story