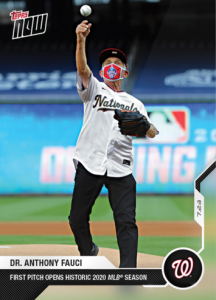 The toss may have been a “flattened curve” low and outside, but the Topps Company’s TOPPS NOW card depicting Thursday’s Major League Baseball opening night first pitch by Dr. Anthony Fauci, director of the National Institute of Allergy and Infectious Diseases and a leading expert on the current COVID-19 pandemic, was a perfect strike, as a record 51,512 copies were sold, more than doubling the previous record for the platform. TOPPS NOW celebrates the greatest moments in sports and entertainment as they happen with trading cards available for 24 hours only, exclusively at Topps.com.

The 79-year-old Brooklyn native’s pitch came prior to the 2020 season opening game between the Yankees and Nationals in Washington, D.C. The ardent fan wore a Nats hat and jersey as well as a facemask as he delivered.

“The popularity of the Dr. Fauci TOPPS NOW card is indicative of how excited fans are for the return of baseball, as well as a tribute to a man that has helped guide the country through this Coronavirus crisis,” said Jeff Heckman, Global Director of Ecommerce. “The unique collectible has been a hit with not just those who follow baseball but all Americans who are appreciative of his service, and is the latest example of how we have been able to keep reinventing and growing fan engagement in these challenging times.”

Among this year’s most sold TOPPS NOW offerings are one depicting San Francisco Giants coach Alyssa Nakken (4,782 cards) and the MLB Players Unite for Change (3,499). The net proceeds from the latter were donated to the Jackie Robinson Foundation.

The success of TOPPS NOW helped spur the Topps Company’s hugely popular “Project 2020,” in which 20 commissioned popular artists re-imagine 20 iconic cards from the past 70 years. More than 1.2 million cards have been sold to date since the first card was issued on the original baseball opening day in March.

Jerry Milani is a freelance writer and public relations executive living in Bloomfield, N.J. He has worked in P.R. for more than 30 years in college and conference sports media relations, two agencies and for the International Fight League, a team-based mixed martial arts league, and now is the PR manager for FAN EXPO, which runs pop culture and celebrity conventions across North America. Milani is also the play-by-play announcer for Caldwell University football and basketball broadcasts. He is a proud graduate of Fordham University and when not attending a Yankees, Rams or Cougars game can be reached at Jerry (at) JerryMilani (dot) com.
@gbpackjerry
Previous Top Pro, Collegiate Players Set For 360 Hoops Invitational Elite Bracket In Daytona Beach Saturday
Next Live NBA Action Returns to SiriusXM