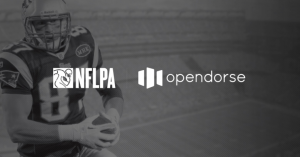 The NFL Players Association (NFLPA), via its licensing and marketing arm, NFL Players Inc., and opendorse, the leading athlete marketing platform that helps the biggest brands in sports share content on social, today announced the renewal of their five-year partnership. The agreement will extend opendorse ­as the social media activation partner for NFL players.

The partnership follows NFL Players Inc.’s launch of REP Worldwide, the athlete brand management and sports licensing business. Further cementing its commitment to help NFL players and other athletes build their personal brands, the NFLPA will be leveraging opendorse’s instantaneous distribution platform for athletes to approve and share content from their brand partners.

“This partnership speaks to the NFLPA’s commitment to its players,” said New England Patriots Tight End Rob Gronkowski. “There’s a massive opportunity for us as players to build valuable personal brands, but we have a limited timeframe to do it. The opendorse partnership is a commitment to helping every NFL player maximize the value of our brands on social.”

Since partnering in 2013, the NFLPA and opendorse have helped nearly one thousand NFL players connect with hundreds of brands to share social media campaigns, reaching more than one billion fans worldwide.

A look at the partnership results since 2013:

“We’re excited to continue to help NFL players build their brands with opendorse,” said NFL Players Inc. President Ahmad Nassar. “Our players and business partners have embraced opendorse to share content on social media. As player-driven marketing becomes prevalent, we have no doubt that opendorse will continue to be extremely valuable to the NFLPA, the players, and our partners.”

“Ahmad Nassar and I sat down in 2013 to discuss the value of social media and its impact on the future of NFL player marketing,” said opendorse CEO Blake Lawrence. “I felt inspired, knowing that opendorse’s vision to help athletes and brands connect on social was shared by the biggest association in sports. I’m proud that five years later, we’re living that vision and helping more than 2,500 athletes worldwide provide 1,500 brands with access to sports fans.”

Jerry Milani is a freelance writer and public relations executive living in Bloomfield, N.J. He has worked in P.R. for more than 30 years in college and conference sports media relations, two agencies and for the International Fight League, a team-based mixed martial arts league, and now is the PR manager for FAN EXPO, which runs pop culture and celebrity conventions across North America. Milani is also the play-by-play announcer for Caldwell University football and basketball broadcasts. He is a proud graduate of Fordham University and when not attending a Yankees, Rams or Cougars game can be reached at Jerry (at) JerryMilani (dot) com.
@gbpackjerry
Previous Comcast Unveils Winter Olympics Viewing Plans
Next Cook, Garcia Leadbetter Join SiriusXM PGA TOUR Radio