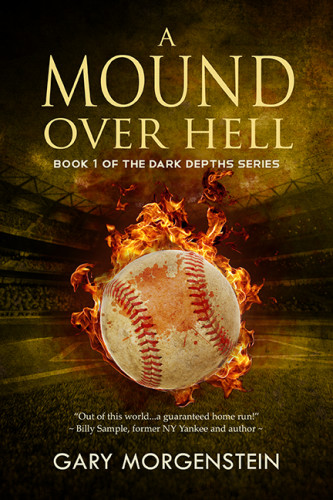 BHC Press has announced it will publish Gary Morgenstein’s provocative new science fiction-baseball novel A Mound Over Hell to launch the author’s The Dark Depths book series. The publishing date is currently set at March 29.

In making the announcement, BHC Press said, “This is one of the most unique novels to be published in the last fifty years, and we’re thrilled to bring Mr. Morgenstein’s vision to life.”

Morgenstein’s fifth novel is set in 2098, twenty-five years after America has been defeated by Islam. Led by Grandma, a new society has been established based on love, ethics, and honesty.

All acts of patriotism, from flying the flag to singing the National Anthem, are illegal. Social media has been banned. Religion is illegal. Children are now revered, and abortion and the use of contraceptives are capital offenses. Teachers, police, and doctors are the most trusted professions, while the entertainment industry, lawyers, and the banking industry are outlawed.

As A Mound Over Hell opens, baseball is beginning its final season—forever. The once all-American sport is now synonymous with terrorism and treason. Holograms run the bases for out-of-shape players and attendance averages fifteen spectators per game. The only ballpark left is Amazon, the once-famous Yankee Stadium. Led by baseball historian Puppy Nedick and a band of former baseball greats, baseball regains its popularity only to become a pawn between those who want peace, and those eager for another war.

“The power of speculative fiction is that it allows you to be timely while taking the reader through a window into a nightmarish future,” Morgenstein said. “Familiar, yet not. But as humanity has always done under the most terrible of circumstances, ordinary people will find the extraordinary courage to build a better world. Or at least try. For as Grandma says in her First Insight, ‘All you need is love.’ That and a baseball field.”

Jerry Milani is a freelance writer and public relations executive living in Bloomfield, N.J. He has worked in P.R. for more than 30 years in college and conference sports media relations, two agencies and for the International Fight League, a team-based mixed martial arts league, and now is the PR manager for FAN EXPO, which runs pop culture and celebrity conventions across North America. Milani is also the play-by-play announcer for Caldwell University football and basketball broadcasts. He is a proud graduate of Fordham University and when not attending a Yankees, Rams or Cougars game can be reached at Jerry (at) JerryMilani (dot) com.
@gbpackjerry
Previous IMDb Reveals All-Time Most Popular Sports-Themed Movies
Next Daytona 500 Coverage Live on SiriusXM