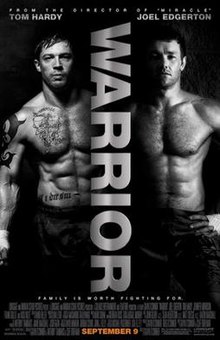 Many sports fans keep their own lists of favorite sports-themed films. (Mine: Pride of the Yankees, Hoosiers, Bang the Drum Slowly, Hoop Dreams, Miracle, Raging Bull, in no particular order).

IMDb has put together its list of the top 10 user-rated films by its proprietary rating system. There’s an emphasis on volume of voting in its methodology, which might keep some older favorites out… Here is the IMDb users’ top 10, and their respective scale-of-10 scores:

“The drama and conflict inherent in head-to-head athletic competitions has inspired a wide array of moving and inventive sports-themed films over the years, and audiences have rooted for these movies to be champions by rating them on IMDb and buying tickets to see them in theaters,” said Matt Kumin, Head of IMDbPro, in a statement. “The films on these Top 10 lists are some of the most iconic movies about athletes of all time and are essential viewing for fans of the Winter Games. IMDbPro has all the details and unrivaled information on sports-themed movies, including those that are currently in development, for our members to explore.”

Jerry Milani is a freelance writer and public relations executive living in Bloomfield, N.J. He has worked in P.R. for more than 30 years in college and conference sports media relations, two agencies and for the International Fight League, a team-based mixed martial arts league, and now is the PR manager for FAN EXPO, which runs pop culture and celebrity conventions across North America. Milani is also the play-by-play announcer for Caldwell University football and basketball broadcasts. He is a proud graduate of Fordham University and when not attending a Yankees, Rams or Cougars game can be reached at Jerry (at) JerryMilani (dot) com.
@gbpackjerry
Previous Snowboarder Shaun White to Release Memoir on Audible
Next What If America Lost World War III? New Novel ‘A Mound Over Hell’ Portends