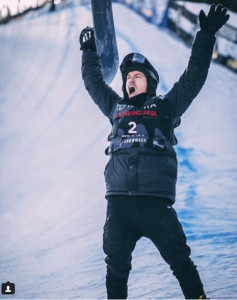 Houghton Mifflin Harcourt and Audible today announced a groundbreaking partnership for the release of the life story of Shaun White, the powerhouse Olympic athlete who transformed a niche hobby—snowboarding—into a mainstream sport.

The memoir will be a radical playbook on how to become a champion. A 3-time Olympian and repeat gold-medalist, and winner of an unprecedented 23 X-Games medals, Shaun White has been a fighter and a pioneer throughout his life, overcoming a congenital heart defect, periodic bouts of depression, and an establishment that didn’t take his sport seriously—until he became a legend and a leader whom everyone had to follow. It will be co-written with Neil Strauss, New York Times bestselling author of The Game.

Upending the traditional flow of print and audio releasing simultaneously, the book will release in audio exclusively on Audible first, giving fans access to White’s memoir performed in his own voice. HMH’s print edition will follow one month later.

“This book and audiobook will each include distinctive and exclusive content that complement each other and are independently attractive,” said Beth Anderson, Audible EVP and Publisher. “In the same way that fans of a franchise will want to read the book and see the movie, we expect that fans will want to enjoy both versions of White’s memoir.”

“It is only fitting,” said Ellen Archer, President, HMH Trade Publishing, “to have a bold business strategy for this renegade celebrity athlete who always breaks the mold.”

The audio and print book editions will showcase the unique opportunities of each format. The audiobook will feature White’s own compelling and accessible narration, complete with the cadence, tempo, and freestyling that have made Shaun a superstar. The Audible version will also include play-by-plays of select competitions, cameo voice appearances from guests, and sound design featuring White’s own musical stylings. The print edition will be a unique package that will appeal to his myriad fans and his own design sensibilities, filled with never-before-seen photos, special endpapers, journal entries and original art by White.

The narrative backbone of the joint project will be Shaun White’s drive to the 2018 Olympics in South Korea in snowboarding while simultaneously preparing for the 2020 Olympics in Tokyo in skateboarding. It will take readers through Shaun White’s domination of the extreme sports world, his sinkhole of substance abuse and depression at the height of his success while dealing with the world’s most “complicated/supportive/selfish/demanding/loving family,” and how he has finally settled into emotional maturity.

Jerry Milani is a freelance writer and public relations executive living in Bloomfield, N.J. He has worked in P.R. for more than 30 years in college and conference sports media relations, two agencies and for the International Fight League, a team-based mixed martial arts league, and now is the PR manager for FAN EXPO, which runs pop culture and celebrity conventions across North America. Milani is also the play-by-play announcer for Caldwell University football and basketball broadcasts. He is a proud graduate of Fordham University and when not attending a Yankees, Rams or Cougars game can be reached at Jerry (at) JerryMilani (dot) com.
@gbpackjerry
Previous NY Times Debuts Augmented Reality Experience At Winter Olympics
Next IMDb Reveals All-Time Most Popular Sports-Themed Movies