Jerry Milani May 15, 2018 News, On The Air Comments Off on Indonesia Football Association Partners With mycujoo For Streaming 2,646 Views 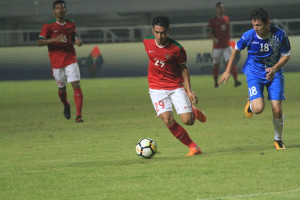 mycujoo has announced the signing of a partnership with the Indonesia Football Association (PSSI) for the streaming of live and on-demand football content over three years, including matches of Liga 1, Liga 2, Liga 3 and Indonesian National teams.
Under the agreement, at least 1150 matches will be live streamed on mycujoo.tv over the next three years, providing unprecedented coverage and free access to fans of Indonesian football.
“Indonesia is a football giant. It deserves a partner that strives to work at its side to make it even greater. mycujoo wants to play that role for the whole of Indonesian football – with its 1st league and men’s national team, and also for women’s, youth, and lower divisions”, said Pedro Presa, CEO of mycujoo, upon signing the three year agreement with PSSI this Saturday.
The agreement between mycujoo and PSSI covers the online live and on-demand streaming rights across all activities of the federation, and specifies that at least 1150 matches streamed over the next three years: “We are looking to showcase as many Indonesian matches as possible – Liga 1, Liga 2, Liga 3 as well, and beyond. mycujoo is about providing teams, players and fans with unprecedented visibility of their football, regardless of their level”, said Presa.
“Starting with the 2018 season and for three years, PSSI and mycujoo will team up to provide Indonesian fans groundbreaking digital access to their home football”, said Marsal Masita, Deputy General Secretary of PSSI. “It is a new path for us to take to grow the game in the local fans’ hearts – we want them to support their favorite teams and players in the stadiums but also at home or on their mobile phones, and partnering with mycujoo allows all this to happen seamlessly”.
The agreement is a continuation of a relationship that was initiated through the Asian Football Confederation’s initiative which introduced mycujoo and its innovative approach to football live streaming in Indonesia. After this introduction, PSSI and mycujoo have decided to take their collaboration further, as part of PSSI’s efforts to develop Indonesian football.
While the initial streams will be those produced around the higher tier of Indonesian football, mycujoo and PSSI are aiming to create an all-encompassing platform for the game throughout the country. Leagues at any levels and clubs will be encouraged to join mycujoo and start live-streaming as well – which, thanks to mycujoo’s innovative technology, can be done easily on a mobile phone using the mycujoo broadcasting app: “This announcement is also a call to all football players of Indonesia – go to your club President and ask to bring your own team to mycujoo!”, added Pedro Presa.
indonesia mycujoo soccer streaming 2018-05-15
Jerry Milani
Share

Jerry Milani is a freelance writer and public relations executive living in Bloomfield, N.J. He has worked in P.R. for more than 30 years in college and conference sports media relations, two agencies and for the International Fight League, a team-based mixed martial arts league, and now is the PR manager for FAN EXPO, which runs pop culture and celebrity conventions across North America. Milani is also the play-by-play announcer for Caldwell University football and basketball broadcasts. He is a proud graduate of Fordham University and when not attending a Yankees, Rams or Cougars game can be reached at Jerry (at) JerryMilani (dot) com.
@gbpackjerry
Previous Gogo Squeez® Becomes Official Applesauce And Yogurt Sponsor Of Kick It 3v3 National Soccer Tour
Next FC Schalke 04″ Partners With Largest Grassroots Soccer Tour ‘Kick It 3v3’