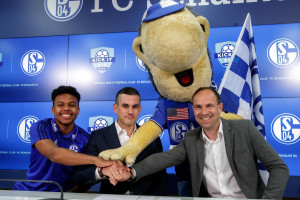 FC Schalke 04, the world-renowned German soccer team that plays in the top-tier Bundesliga, has announced today that it will be the official soccer club of Kick It 3v3, the largest and longest running grassroots soccer tournament tour in the US. Schalke will reach over 30,000 youth players across the country this year through more than 65 Kick It events.

Schalke, who recently secured a spot in the prestigious Champions League by clinching second place in the German Bundesliga, will put significant resources behind the Kick It partnership to make a lasting impact with young soccer players throughout America. In addition to providing each participant with a special Schalke inspired jersey, the club will have a strong presence at Kick It events and also will invite one of the winning teams from its tournaments to the famous VELTINS-Arena for a visit at Schalke’s home grounds.

Schalke will also look for opportunities to bring their “Knappenschmiede” youth coaches to top Kick It tournaments to provide fun and informative soccer clinics. Schalke is famous for developing young talent through their “Knappenschmiede” academy, with graduates such as US National team star Weston McKennie as well as a plethora of stars across Europe. With one of the club’s main focuses on youth development, the Kick It tournaments will also become a great platform for scouting new and promising talent.

For 28 years, Kick It has built a reputation for being the leader in managing and executing grassroots soccer tournaments. Kick It has helped grow the sport of soccer and has provided an exciting way for kids to improve their soccer skills while having fun. In addition to hundreds of thousands of Kick It alumni across the country who are now parents watching their own kids play soccer, other Kick It alumni include US National Team players, MLS players and college athletes.

“I remember those fun weekends playing in Kick It tournaments as a kid in Dallas,” said Weston McKennie, Schalke midfielder and US Men’s National Team star. “Small sided games are such a cool way to develop skills and have a blast with your friends. I’m excited that Schalke will be a big part of Kick It in America.”

“We are excited to partner with Schalke and share their incredible story to the thousands of athletes and spectators that attend Kick It events each year,” said Matt Novogratz, CEO of Kick It. “Schalke has a rich tradition of developing some of the best soccer players in the world. Having their youth coaches attend our regional and national events will enhance the memorable experience of a Kick It tournament, while continuing to reinforce the importance of small-sided training in the development of a young soccer player. We are also excited to introduce Kick It to Germany and the Schalke fanbase while we collectively build towards a truly global 3v3 soccer world championship.”

Jerry Milani is a freelance writer and public relations executive living in Bloomfield, N.J. He has worked in P.R. for more than 30 years in college and conference sports media relations, two agencies and for the International Fight League, a team-based mixed martial arts league, and now is the PR manager for FAN EXPO, which runs pop culture and celebrity conventions across North America. Milani is also the play-by-play announcer for Caldwell University football and basketball broadcasts. He is a proud graduate of Fordham University and when not attending a Yankees, Rams or Cougars game can be reached at Jerry (at) JerryMilani (dot) com.
@gbpackjerry
Previous Indonesia Football Association Partners With mycujoo For Streaming
Next FOX Teams with Ericsson, Intel, AT&T to Deliver 4K over 5G at 2018 U.S. Open