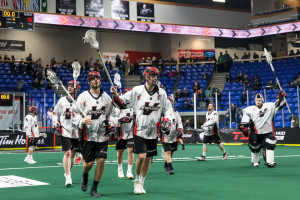 Today the National Lacrosse League (NLL), the largest men’s professional indoor lacrosse league in North America, announces the sale of the Vancouver Stealth to Canucks Sports & Entertainment. The new Vancouver franchise will begin play during the 2018-19 season at Rogers Arena.

“First and foremost, I would like to thank Denise Watkins for her many years of passion and commitment at the helm of the organization, which included bringing a championship to the franchise in 2010,” said NLL Commissioner Nick Sakiewicz. “This is another pivotal moment for the League and we are honored and thrilled to have the Aquilini family and Canucks Sports & Entertainment leading our Vancouver franchise in one of the most relevant lacrosse communities in North America.”

The franchise will undergo a transformation during this off season as they take on a new team name, logo and brand to be unveiled in the coming months. This fresh direction will reflect the new ownership and a new era for the team.

“British Columbia has a rich history of supporting lacrosse, and people from across the country and around the world know how important this market is to the game,” stated Jeff Stipec, COO Canucks Sports & Entertainment. “We look forward to continuing to grow the game in Vancouver, both on the floor and in the community. We can’t wait to get to work.”

The Canucks are working diligently to prepare for the upcoming season. They will be providing regular updates to the market along with a special event in the coming months to announce the new brand in Vancouver.

For additional information on the NLL or the new Vancouver franchise, visit NLL.com.

Jerry Milani is a freelance writer and public relations executive living in Bloomfield, N.J. He has worked in P.R. for more than 30 years in college and conference sports media relations, two agencies and for the International Fight League, a team-based mixed martial arts league, and now is the PR manager for FAN EXPO, which runs pop culture and celebrity conventions across North America. Milani is also the play-by-play announcer for Caldwell University football and basketball broadcasts. He is a proud graduate of Fordham University and when not attending a Yankees, Rams or Cougars game can be reached at Jerry (at) JerryMilani (dot) com.
@gbpackjerry
Previous From World Cup to Olympics To The NFL, Thuuz Working To Customize The Excitement and The Memories, Behind The Scenes
Next CREED II Official Trailer Premieres Tomorrow