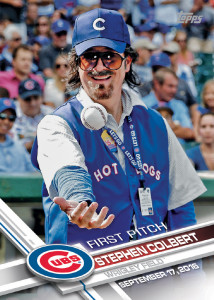 Baseball season is back, and it begins with the launch of 2017 Topps® Baseball Series 1. Every year since 1952, The Topps Company, the exclusive trading card partner of Major League Baseball, has released its annual baseball card set that includes fan favorites, superstars, up-and-coming rookies and the recent addition of popular First Pitch™ inserts.

Today, baseball fans around the world can start ripping packs and collecting cards of amazing moments, rookies and superstars. As announced last week, Chicago Cubs third baseman and 2016 NL MVP Kris Bryant was voted by fans to be on Card No. 1 for 2017 Topps Baseball. Bryant joins a long list of great players who have been represented on the first Topps card of the year from Jackie Robinson and Ted Williams to Mike Piazza and Derek Jeter. Also included in the series are special cards depicting on-air personalities from the MLB Network, including Hall of Famer John Smoltz, hosts Greg Amsinger and Lauren Shehadi, and former players Harold Reynolds, Sean Casey and more. The first 10 cards of this 29-card set will appear in 2017 Topps Baseball Series 1 and the rest within the June release of 2017 Topps Baseball Series 2 and the October release of 2017 Topps Baseball Update.

“Topps Baseball Series 1 is the official launch of the baseball season and a part of Americana as generations of fans eagerly await the annual baseball card release,” said David Leiner, General Manager and Vice President of the North American Sports & Entertainment Division at Topps. “Each year, Topps Baseball includes the best players and must-have rookie cards. Collecting cards is the perfect hobby to enjoy with friends and family, and we are proud to keep that tradition alive.”

Much of what makes baseball and Topps cards great is celebrating what happens on the field. This year’s annual release looks at memorable moments and milestones including Jackie Robinson Day, Mother’s Day, Father’s Day, Memorial Day, and special throwback nights showcasing Clubs’ classic uniforms. Topps is also honoring MLB’s award winners from 2016 with special cards made for the AL and NL Most Valuable Players, Rookies of the Year and Comeback Player of the Year, among others.

“As the game has evolved so has our product offering,” said Clay Luraschi, Topps Vice President of Product Development. “This year’s release features a modern design and includes players’ social media information on the backs of cards, all while celebrating the rich history of Topps and Major League Baseball.”

Opening a pack of cards brings joy to long-time and new collectors alike. Parents and grandparents can share the thrill and excitement of a lifelong hobby with younger family members. They can also teach them about Topps’ history with special cards dedicated to 1987 Topps, featuring the memorable wood-grain design that can be found in the new packs. Topps Baseball blends its rich heritage of traditional cards with new technologies including Topps NOW, on-demand trading cards, and digital cards from Topps BUNT®, which can also be found in the BUNT app.

The Ultimate Card Giveaway includes a great blend of new and vintage cards, giving collectors a taste what Topps has offered throughout its 66 years of creating baseball cards. Many of the cards will include a special foil stamp to celebrate the joy of rediscovering Topps Baseball, from fabulous memories of the past to the game’s greatest moments as they happen.

Don’t miss out on the thrill of opening new packs of 2017 Topps Baseball Series 1 starting Feb. 1.

Jerry Milani is a freelance writer and public relations executive living in Bloomfield, N.J. He has worked in P.R. for more than 30 years in college and conference sports media relations, two agencies and for the International Fight League, a team-based mixed martial arts league, and now is the PR manager for FAN EXPO, which runs pop culture and celebrity conventions across North America. Milani is also the play-by-play announcer for Caldwell University football and basketball broadcasts. He is a proud graduate of Fordham University and when not attending a Yankees, Rams or Cougars game can be reached at Jerry (at) JerryMilani (dot) com.
@gbpackjerry
Previous Nickelodeon Gets In The Game To Give Kids All Access To Super Bowl LI
Next AT&T AUDIENCE Network Greenlights “Religion of Sports” for Second Season