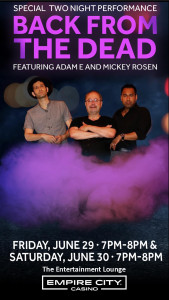 Sports publicist turned lyricist John Cirillo and his new music venture Back from the Dead Music LLC will present a special, two-night performance featuring Adam E and Mickey Rosen at Empire City Casino this Friday night, June 29th, and Saturday night, June 30th. Both concerts will be in the casino’s Entertainment Lounge from 7:00 to 8:00 PM. This will be the first public performance by Adam and Mickey in tandem. Each are accomplished solo performers.

Visit https://www.backfromthedeadmusic.com/ It will include Cirillo’s salute to former Knicks star John Starks entitled Sparks are Flying, which debuted at the Starks Foundation Casino Night benefit last week in New York City. Cirillo was the director and vice president of communications for the Knicks from 1984 through 1997, when he and Starks established a strong bond that still stands today. Watch Sparks are Flying: https://youtu.be/fEII90AaoVw.

Each artist will perform three of Cirillo’s rich, story-telling lyrics, as well as a series of their own original composition. Adam E will perform Hey Professor, Newport and The Wine Bar, while Rosen’s playlist includes The Troubadour, Sweet Honey and The Sojourn. It is fitting that the debut will take place at Empire City Casino at Yonkers Raceway, where Cirillo began his public relations career in 1981 under Tim Rooney. His public relations firm Cirillo World has handled public relations for the casino since its inception in 2006. The Brooklyn-born Cirillo is a longtime resident of Chappaqua, NY.

Tags back from the dead music

Jerry Milani is a freelance writer and public relations executive living in Bloomfield, N.J. He has worked in P.R. for more than 30 years in college and conference sports media relations, two agencies and for the International Fight League, a team-based mixed martial arts league, and now is the PR manager for FAN EXPO, which runs pop culture and celebrity conventions across North America. Milani is also the play-by-play announcer for Caldwell University football and basketball broadcasts. He is a proud graduate of Fordham University and when not attending a Yankees, Rams or Cougars game can be reached at Jerry (at) JerryMilani (dot) com.
@gbpackjerry
Previous New York Sports Tours Launches
Next mycujoo To Stream 1500 Beach Soccer Matches through 2021