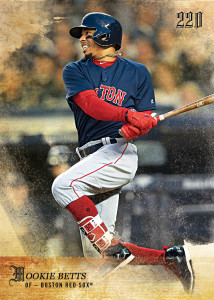 For the first time in Topps history, the iconic company has given over the reins to someone else.

Washington Nationals star Bryce Harper has created his own Topps baseball card set, featuring top players in the league, his all-time favorites – and even guys with the best hair.

Topps X Bryce Harper “220” is a first-of-its-kind set where Harper hand-picked the design, chose the players, theme, and added his own words to it. His meticulous approach resulted in a set fans are sure to love.

“I have never done anything like this to really design a product, put something forward like this,” said Harper whose father collected baseball cards. “I’ve done cleats and bats, but to be able to do a baseball card is special.”

• Fourteen of MLB’s top players that would encompass his own team
• Best Hair: Harper’s top five MLB players with great hair
• Harper’s Heroes: highlights his all-time favorite moments in MLB history
• Look Good, Feel Good: Showcases the essence of Harper on and off the field.

The set includes such stars as:

Harper is the first person to be featured for the personalized sets from Topps. Look for more sets in the future from top athletes, celebrities and notable figures. For more details, go to Topps.com.

Jerry Milani is a freelance writer and public relations executive living in Bloomfield, N.J. He has worked in P.R. for more than 30 years in college and conference sports media relations, two agencies and for the International Fight League, a team-based mixed martial arts league, and now is the PR manager for FAN EXPO, which runs pop culture and celebrity conventions across North America. Milani is also the play-by-play announcer for Caldwell University football and basketball broadcasts. He is a proud graduate of Fordham University and when not attending a Yankees, Rams or Cougars game can be reached at Jerry (at) JerryMilani (dot) com.
@gbpackjerry
Previous XTECH Equipment Kicks Off 2018 Football Season Amidst Record Sales Growth And Engagement
Next Amore Book Takes Fans Up On The Hilltop