Amore Book Takes Fans Up On The Hilltop 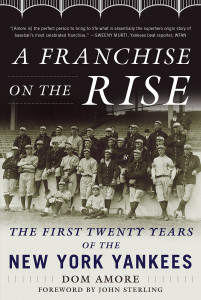 Origin stories aren’t just for superheroes. True Batman fans know about Bruce Wayne’s parents being murdered in front of his eyes, and those who love Superman know he left Krypton just before its destruction and ended up on Earth.

And while baseball’s lineage is long disputed and quite a story in itself, that of its premier franchise, the New York Yankees, is a colorful one, with interesting characters from its owners to managers and players. Though lacking much success on the field, the first two decades of what would be the most decorated team in sports was nonetheless worth the in-depth look that Conn.-based MLB reporter Dom Amore provides in A Franchise on the Rise: The First Twenty Years of the New York Yankees (2018, Sports Publishing, 308 pps, $27.99).

Amore highlights some names that many fans know, but whose exploits may be less familiar, like Frank “Home Run” Baker, “Wee Willie” Keeler and owner Jacob Ruppert. But he also brings a few obscure ones to light, like “Kid” Elberfeld, Cap Huston and George Stallings, all famous at the time but mostly lost to history today.

It’s stories like that of Russ Ford, who came from obscurity upon “discovering” a new pitch before the 1910 season, much like another Yankee righthander named Mariano Rivera did eight decades later. For Ford it was the spitball, and it baffled hitters and catchers alike, though only for a brief time, burning brightly before his “secret” pitch became known. Rivera, of course, used the cutter, and rode it all the way to the Hall of Fame.

Those early Yankees (nee Highlanders) featured a few who would end up in Cooperstown, but Baker and Keeler, though productive with New York, had their best years behind them. Only Jack Chesbro, one of a few members of the original 1903 squad to have “jumped” from the rival National League, did the majority of his work for the franchise. Ruppert, manager Miller Huggins and Ed Barrow, whose role with the team most closely resembled that of today’s general manager, also were enshrined largely for their time with the Yankees.

And another Hall of Famer, though a member of the building in Canton rather than that in Cooperstown, figures into the narrative, with the story of how George Halas burst onto the scene just a year before Babe Ruth‘s arrival changed everything in 1920.

Even Hilltop Park, the (almost literally) built-in-a-day home that lasted just the first 10 years of the Highlanders’ existence, has a place in the team’s history and thus in Franchise. From a right field ravine that almost swallowed Keeler to a heckling fan that almost led to a full player revolt (see Cobb, Tyrus R.), the field had its share of craziness, if only three real pennant races, in its wide expanse.

In all, it’s an enjoyable look at a forgotten time in Yankee history, but one that true fans should embrace as much as Peter Parker’s early arachnid days.

Jerry Milani is a freelance writer and public relations executive living in Bloomfield, N.J. He has worked in P.R. for more than 30 years in college and conference sports media relations, two agencies and for the International Fight League, a team-based mixed martial arts league, and now is the PR manager for FAN EXPO, which runs pop culture and celebrity conventions across North America. Milani is also the play-by-play announcer for Caldwell University football and basketball broadcasts. He is a proud graduate of Fordham University and when not attending a Yankees, Rams or Cougars game can be reached at Jerry (at) JerryMilani (dot) com.
@gbpackjerry
Previous Nationals’ Bryce Harper Selects Own Topps Cards Set Dubbed ‘220’ – ‘Second To None’
Next Nice Debut, Ugly Strat Card