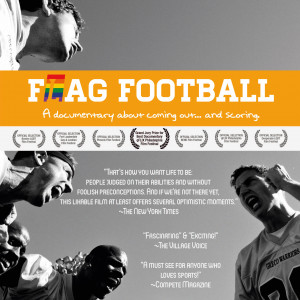 Helmed by award-winning director and producer Seth Greenleaf, and executive produced by Emmy Award winner and Academy Award nominee Sam Pollard, F(L)AG FOOTBALL has been a big hit on the festival circuit, winning Audience Choice Awards from Phoenix to Philadelphia. It kicked off its theatrical release last year during Gay Pride in New York City, and received rave reviews from The New York Times, The Village Voice, and The Hollywood Reporter.

“To continue the progress for gay rights in America, it’s crucial to break down those final strongholds of prejudice and inequality,” said Director Seth Greenleaf. “There are over 4,000 professional athletes between the MLB, NBA, NHL, and NFL. Zero publicly identify as gay. We must unlink the association between ‘gay’ and ‘weak’ and allow the next generation of young gay men and women to be accepted as the athletes they are, without prejudice or negative consequence. As an athlete my entire life and having learned so much about myself through sports, I feel it is vital to make these opportunities available and welcoming to all.”

F(L)AG FOOTBALL is described by The Village Voice as “Fascinating & Exciting!” and The New York Times expounds, “It’s how you want life to be: People judged on their abilities without foolish preconceptions. And if we’re not there yet, this likable film offers optimistic moments.”

The film’s digital release coincides with the release of the film’s score by composer and Sundance Fellow Christopher North, also available on iTunes.

Jerry Milani is a freelance writer and public relations executive living in Bloomfield, N.J. He has worked in P.R. for more than 30 years in college and conference sports media relations, two agencies and for the International Fight League, a team-based mixed martial arts league, and now is the PR manager for FAN EXPO, which runs pop culture and celebrity conventions across North America. Milani is also the play-by-play announcer for Caldwell University football and basketball broadcasts. He is a proud graduate of Fordham University and when not attending a Yankees, Rams or Cougars game can be reached at Jerry (at) JerryMilani (dot) com.
@gbpackjerry
Previous EPIX® To Air Final Fight Of ‘The Contender’ Live From Los Angeles
Next ‘Bet-Cast’ To Air In Las Vegas Saturday