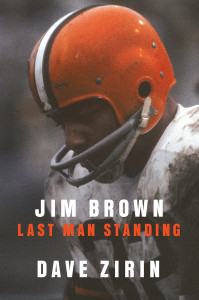 Jim Brown is many things… All-time NFL great, arguably the best ever. Successful actor. Activist. And, yes, accused attacker of women over three decades-plus. These are all part of Brown’s 82 years on the planet, and now more than a half century since he left the gridiron, he still commands respect and attention.

In Jim Brown: Last Man Standing (Blue Rider Press, 320pps., $27.99), author Dave Zirin, sports correspondent for The Nation and host of the noted sports and political podcast “Edge of Sports,” dives into all of these aspects of Brown’s life and more, in a gripping biography that, though it focuses somewhat more on his off-field legacy than his football exploits, shows that Brown has taken the same run-you-over approach to his activism that he did to 1960’s NFL defenses and to Hollywood.

Brown is often cited as the top example of an athlete leaving his or her sport while on top. After all, he led the NFL in rushing with more than 1000 yards in eight of his nine years (and had 996 in the other), in a time when the league played 12 (first four years) then 14 contests. He started every one of those 118 games, despite averaging more than 22 touches (and usually two or three hits per touch) per contest, and his 12,312 rushing yards were the NFL standard for years. But when owner Art Modell, who gained control of the franchise in Brown’s second year with the team, didn’t allow his star to return late to training camp when filming was delayed on The Dirty Dozen in 1966, Brown elected to retire rather than be “punked,” in his words.

This retirement, via open letter read on the movie set which in part said to Modell, “…I feel you must realize that both of us are men and that my manhood is just as important to me as yours is to you,” was entirely in character. “Last Man Standing,” indeed.

Brown’s “manhood” is at the essence of everything else in his life, the theme persistent throughout Zirin’s book. Brown deals with politicians, drug kings, drug addicts, other activists and women the same way—straight on, and for better or for worse. He tried through the formation of the National Negro Industrial and Economic Union, and later the Ameri-I-Can organizations to empower African Americans to succeed through economic independence. “For Brown, black ownership was a tool of resistance that many overlooked,” Zirin writes. “Part of this … was because he thought the ‘integrationist’ civil rights movement offered no solutions for the reality of the problems black Americans faced.”

The through line follows Brown’s complicated legacy—and a certain irony in the book’s subtitle—the defiance and assertion of his manhood which has defined his life has been both his strongest asset (how many gang members did he convert along the way?) and fuel for his detractors (his mistreatment of women, in the name of ‘manhood’).

One of Zirin’s best traits as a columnist and podcaster is his willingness to call B.S. when he sees fit. Last Man Standing can be seen as “warts and all,” but that’s a matter of perspective. How does the reader define “manhood?” How might his/her political leanings shape their view of Brown, in full? And how can his greatest admirers, who have believed in what he has stood for, reconcile both his issues with women and his alignment with the current Presidential administration? The questions may color the reader’s take on the book, but unquestionably he or she will be left with a greater understanding of the man and what he has meant.

Jerry Milani is a freelance writer and public relations executive living in Bloomfield, N.J. He has worked in P.R. for more than 30 years in college and conference sports media relations, two agencies and for the International Fight League, a team-based mixed martial arts league, and now is the PR manager for FAN EXPO, which runs pop culture and celebrity conventions across North America. Milani is also the play-by-play announcer for Caldwell University football and basketball broadcasts. He is a proud graduate of Fordham University and when not attending a Yankees, Rams or Cougars game can be reached at Jerry (at) JerryMilani (dot) com.
@gbpackjerry
Previous F1 Comes to America: United States Grand Prix Live on ABC Sunday
Next ‘Bama, Clemson Picked To Vie For Title