A rash of injuries to several of the NBA’s top superstars has directly contributed to an early season dip in television ratings, according to research conducted by strategic consulting firm Altman Vilandrie & Company in partnership with MoffettNathanson. Overall, four of the top five players selected by NBA fans as favorites to watch have missed all or most of their teams’ games this season.

Altman Vilandrie & Company conducted a comprehensive, 5,000-respondent sports survey just prior to the NBA season, which included a measurement of NBA fans’ team and player “favorites” to watch. Comparing the favorite measurements of the six absent superstars – Stephen Curry, Kevin Durant, Klay Thompson, Zion Williamson, DeMarcus Cousins, and John Wall – vs. the overall sum of favorites measures the “superstar void.” The void directly mirrors the NBA’s season-to-date decline in TV ratings: the cumulative interest level in watching the six stars who have missed every game this season is 16 percent, roughly equivalent to the 16-percentage drop in ratings for NBA national broadcasts this season. Adding in Kyrie Irving and Draymond Green, two favorite players to watch who have missed time this season, boosts the cumulative interest level to 20 percent.

“This unprecedented spate of injuries has created a superstar void that has had a real effect on TV ratings,” said Altman Vilandrie & Company Principal Matt Del Percio, who directed the survey. “Our analysis shows that NBA fans, who are much younger on average than fans of the other major team sports, make viewing decisions largely based on watching superstar players. The good news for the NBA is that the decline in ratings seems to be largely explained by the absence of these players rather than a decline in overall interest in the NBA.” 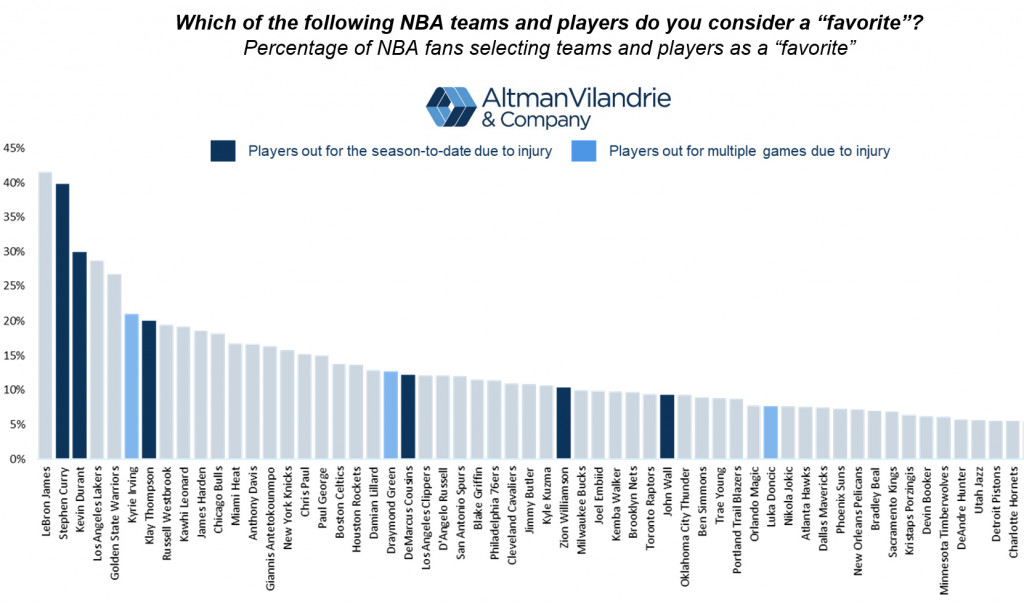 Jerry Milani is a freelance writer and public relations executive living in Bloomfield, N.J. He has worked in P.R. for more than 30 years in college and conference sports media relations, two agencies and for the International Fight League, a team-based mixed martial arts league, and now is the PR manager for FAN EXPO, which runs pop culture and celebrity conventions across North America. Milani is also the play-by-play announcer for Caldwell University football and basketball broadcasts. He is a proud graduate of Fordham University and when not attending a Yankees, Rams or Cougars game can be reached at Jerry (at) JerryMilani (dot) com.
@gbpackjerry
Previous FanHub Expands Relationship With ATP By Launching ATP Cup Bracket Challenge Game
Next New Boxing Podcast: BoxingInsider Radio Season 1 Was a Success