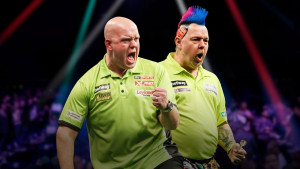 BBC AMERICA today announced the expansion of its highly successful broadcast and streaming of Professional Darts, adding the 2018/2019 World Darts Championship from London’s sold-out Alexandra Palace from December 13 to January 1. The best matches of the week will air Sunday mornings from 9:00am-12:00pm ET. BBCA will stream a record 111 hours live on BBC America.com. The Final will air in primetime on BBC AMERICA on Tuesday, January 1 at 9:30pm ETfollowing the Doctor Who New Year’s Day special.

This year’s World Championship includes U.S. Champion Chuck Puleo, North American Champion and Canadian Jeff Smith and Canadian Jim Long, in the largest field the event has ever seen, with 96 competitors battling for over $3.1 million in prize money and the prestigious Sid Waddell Trophy.

Puleo, who topped the domestic rankings this year to earn his World Championship debut, plays World Youth Champion Dimitri Van den Bergh in the competition’s first round on Tuesday, December 18.

“Darts brings together everything we love about sports – drama, suspense, excitement and wildly passionate fans. BBCA’s comprehensive coverage will super-serve sports fans and also engage more casual viewers who want to experience this fan-fueled phenomenon first-hand,” said executive director of BBC AMERICA, Courtney Thomasma.  “We were thrilled at the level of enthusiasm for the debut of Premier League Darts last spring, and are looking forward to being the U.S. home of the World Darts Championship this month. Game on!”

BBC AMERICA launched its darts initiative with the 2017/2018 World Darts Championship, the most watched darts tournament on US TV in a decade, beating professional darts coverage on sports networks including NBC Sports Network, FS1, FS2, ESPN Classic, and ESPNU. That elite competition reached nearly 4 million unique viewers on BBC America, with the final trending globally on Twitter and setting the stage for the expansion into Premier League Darts which drew over 10 million unique viewers on the channel. Premier League Darts also generated nearly 3 million livestream views, growing +9x from the first half to the second half of the tournament. Livestream views consist of views on BBCAmerica.com and Facebook.

A fan-fueled fringe sport phenomenon, darts is second only to football (aka soccer) as a televised sport in the UK.  It has the spectacle of wrestling, the stakes of poker and it has fans beyond anything you’ve seen in their enthusiasm. It’s rowdy, it’s skillful and now Americans are witnessing the best in the game with BBC AMERICA’s World Darts Championship.

Jerry Milani is a freelance writer and public relations executive living in Bloomfield, N.J. He has worked in P.R. for more than 30 years in college and conference sports media relations, two agencies and for the International Fight League, a team-based mixed martial arts league, and now is the PR manager for FAN EXPO, which runs pop culture and celebrity conventions across North America. Milani is also the play-by-play announcer for Caldwell University football and basketball broadcasts. He is a proud graduate of Fordham University and when not attending a Yankees, Rams or Cougars game can be reached at Jerry (at) JerryMilani (dot) com.
@gbpackjerry
Previous Foley’s NY Hosts Trio of Veteran Football Writers Dec. 19
Next The Players’ Tribune Announces Acquisition of Unscriptd