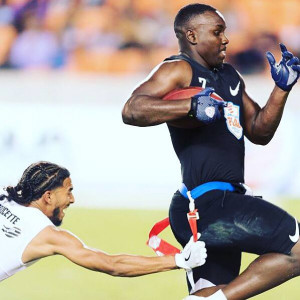 The American Flag Football League (AFFL), announced today the renewal of its partnership with CSM LeadDog, an award-winning integrated marketing agency, for the second consecutive year.

AFFL leadership shifted its multi-agency approach in season one of seven different agencies to one company with its choice of CSM LeadDog to solely spearhead and execute all league-related services. CSM LeadDog will be tasked with integrated marketing, public relations, sponsorship, social media management and event production including, in-game promotions, fan experiences, and operations.

“After a successful inaugural season last year, we look forward to continuing to build the sport of flag football and the AFFL across the country,” said Jeff Lewis, AFFL founder. “With their legacy of collaborating with sports properties, CSM LeadDog has proven to be the go-to agency for consumer experiences, integrated marketing and more, and we hope to continue the momentum we established in 2018 with one voice guiding us.”

The inaugural 2018 AFFL season consisted of a bracket-style, single-elimination tournament that featured 128 amateur flag football teams, and 4 teams comprised of professional athletes. The two champions, Godspeed (Pro Champion) and Fighting Cancer (Amateur Champion), met in the Ultimate Final to decide the US Open champion, with Fighting Cancer taking home the $1 million prize in a 26-6 victory. The Quarterfinals, Semi-Finals, Finals, and Ultimate Finals (amateurs vs. professionals) were televised live on the NFL Network.

“Flag football is becoming extremely popular, and we’re thrilled to help guide AFFL into becoming a mainstream sport,” said Dan Mannix, CEO of CSM North America. “It takes a huge amount of trust for a property to task all of their needs to a single agency, but in doing so, it allows a much more efficient way to strategize and execute – and we’re humbled that the AFFL has selected us as that agency.”

Jerry Milani is a freelance writer and public relations executive living in Bloomfield, N.J. He has worked in P.R. for more than 30 years in college and conference sports media relations, two agencies and for the International Fight League, a team-based mixed martial arts league, and now is the PR manager for FAN EXPO, which runs pop culture and celebrity conventions across North America. Milani is also the play-by-play announcer for Caldwell University football and basketball broadcasts. He is a proud graduate of Fordham University and when not attending a Yankees, Rams or Cougars game can be reached at Jerry (at) JerryMilani (dot) com.
@gbpackjerry
Previous Cowher To Be Honored With Pat Summerall Award During Super Bowl
Next United Fight Alliance Expands Network Coverage with NBC Sports Regional Networks