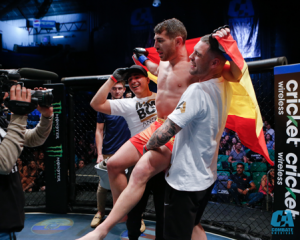 The numbers garnered for Friday night’s show continue a pattern of ratings dominance over other MMA and major sports competitors, and represent an increase of over 13 percent from its last live show, “Combate Americas: Mexico vs. USA” on February 22.

“Our viewership proves Combate Americas to be a rising ratings magnet,” said Combate Americas CEO Campbell McLaren. “Our momentum is building, and we see no ceiling for how high our numbers can go. The industry may not have seen this coming, but we have known all along that we will change the face of the sport one telecast at a time.”

The live event, which took place at the historic Arena Coliseo in Guadalajara, Jalisco, Mexico produced a number of ratings highlights that includes overpowering Telemundo’s “Boxeo Telemundo,” which began at 11:35 p.m. ET, by 42 percent, or nearly 160,000 viewers.

With its UDN viewership (139,000 viewers) alone, “Combate Americas: Mexico vs. Spain” also outperformed the general market leader and longest standing MMA franchise, beating “UFC Unleashed,” which aired on ESPN2 on Friday at 1 a.m. ET, by a margin of more than 13,000 viewers.

The live, U.S. television viewership was the highest rated of any show in the same time slot on Univision on any other day last week.

Jerry Milani is a freelance writer and public relations executive living in Bloomfield, N.J. He has worked in P.R. for more than 30 years in college and conference sports media relations, two agencies and for the International Fight League, a team-based mixed martial arts league, and now is the PR manager for FAN EXPO, which runs pop culture and celebrity conventions across North America. Milani is also the play-by-play announcer for Caldwell University football and basketball broadcasts. He is a proud graduate of Fordham University and when not attending a Yankees, Rams or Cougars game can be reached at Jerry (at) JerryMilani (dot) com.
@gbpackjerry
Previous National Lacrosse League Content Free on B/R Live
Next America’s Boating Channel™ Debuts its Third Season