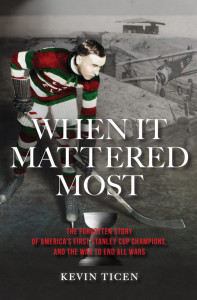 Clyde Hill Publishing, an independent press, announced that its latest title, WHEN IT MATTERED MOST: The Forgotten Story of America’s First Stanley Cup Champions, and the War to End All Wars, will be available for purchase April 2, and can be pre-ordered today.

The author, Kevin Ticen, will discuss the book and answer questions at four upcoming readings in the Seattle area:

WHEN IT MATTERED MOST is the inspiring story of the first American team to win the Stanley Cup—a feat largely lost to history. In the winter of 1917, as Europe spiraled rapidly out of control and pulled the U.S. into the greatest conflict the world had ever seen, a talented band of athletes in the Pacific Northwest fought to turn themselves into an elite team. That elite team would face the looming war, their own insecurities, and fierce opponents on both coasts of Canada to captivate a community and journey toward hockey immortality.

Ticen tells the story of the Seattle Metropolitans through the lens of his own experiences as an athlete and coach, rounding out portions of the story lost to history through an understanding of the people involved and the inner-workings of championship teams.

“Had they played today, statues of Hall of Famers Frank Foyston, Jack Walker, and Hap Holmes would stand guard outside the Seattle Center Arena and the story of the 1917 Stanley Cup would be told alongside the greatest American championship teams,” said Ticen. “Unfortunately, their achievement played out for the masses exclusively in newspapers rather than today’s social media and airwaves. As a result, America’s first Stanley Cup champions were relegated to a mere footnote in history.”

Ticen spent more than six years writing about Seattle sports as the Director of Marketing and Communications for the Seattle Sports Commission. A former catcher on the University of Washington baseball team, Ticen played professionally in the Anaheim Angels minor league system.

Jerry Milani is a freelance writer and public relations executive living in Bloomfield, N.J. He has worked in P.R. for more than 30 years in college and conference sports media relations, two agencies and for the International Fight League, a team-based mixed martial arts league, and now is the PR manager for FAN EXPO, which runs pop culture and celebrity conventions across North America. Milani is also the play-by-play announcer for Caldwell University football and basketball broadcasts. He is a proud graduate of Fordham University and when not attending a Yankees, Rams or Cougars game can be reached at Jerry (at) JerryMilani (dot) com.
@gbpackjerry
Previous HyperX Announces HyperX QuadCast Microphone for Streamers and Casters
Next FloSports To Live Stream 2019 Beat The Streets For Fifth Consecutive Year on FloWrestling.com