Comcast Spectacor and The Cordish Companies today announced plans for a $50 million, next-generation esports and entertainment venue in the heart of the Philadelphia Sports Complex. Adjacent to Xfinity Live!, the first-of-its-kind venue will seat up to 3,500 guests and stand as the largest new-construction, purpose-built esports arena in the Western Hemisphere. Its primary tenant, the Philadelphia Fusion esports franchise, is one of 20 international teams competing in the Overwatch League. In addition to serving as a premiere destination for competitive gaming events, Fusion Arena will also host a variety of live entertainment programming and experiences.

“We’re thrilled to introduce a venue like no other as we move forward with the next phase of development within the Philadelphia Sports Complex,” said Dave Scott, Chairman and CEO, Comcast Spectacor. “Fusion Arena gives esports fans a best-in-class venue to call home and be proud of. Beyond competitive gaming, it’s a stunning facility that will host a wide array of events.”

“It is a tremendous honor for The Cordish Companies to grow its partnership with Comcast Spectacor and bring a state-of-the-art, world-class esports and entertainment venue to the heart of the Philadelphia Sports Complex,” said Blake Cordish, Principal of The Cordish Companies. “Fusion Arena will set the gold standard for competitive gaming and debut on one of the country’s most exciting platforms of sports and entertainment amid Philadelphia’s professional sports teams. Today’s announcement marks an exciting moment for the Comcast Spectacor-Cordish partnership as the next phase of Xfinity Live! continues to unfold.”

Designed by Populous, an architecture firm with deep experience in the fast-growing esports space, Fusion Arena will boast 60,000 square feet of new construction, featuring a stunning and futuristic design throughout. Construction is set to begin this summer.

Eliciting the venue’s first wow is the arena’s exterior, a sleek and dynamic skin that draws inspiration from the hardware powering esports’ meteoric rise around the globe. The incorporation of industrial materials throughout Fusion Arena’s design pays tribute to Philadelphia’s heritage as the “workshop of the world.” A captivating 6,000-square-foot public entry will greet guests as they enter the space and includes 2,000 square feet of interactive media surface hovering 30 feet above them. 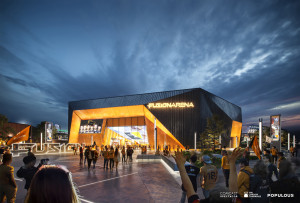 “We are thrilled to bring this ambitious idea to life and celebrate the arrival of Fusion Arena with gaming enthusiasts throughout the region and beyond,” said Joe Marsh, Chief Business Officer of Spectacor Gaming and the Philadelphia Fusion. “This project places esports alongside all the major traditional sports that call South Philadelphia home.”

Fusion Arena is the second of several announcements surrounding Comcast Spectacor and The Cordish Companies’ real estate development within the Philadelphia Sports Complex, adjacent to Xfinity Live!. In February, the partnership announced plans for Pattison Place, an $80 million, new construction Class-A office tower. Since opening in 2012, Xfinity Live! has been a prominent dining, entertainment and hospitality anchor for the region, dramatically changing the fan experience for Flyers, Eagles, Phillies and 76ers fans, as well as out of town guests. Welcoming millions of visitors a year, Xfinity Live! has energized the Philadelphia Sports Complex via year-round events and experiences including concerts, festivals, family fun days, community functions, charity events, and watch parties.

Jerry Milani is a freelance writer and public relations executive living in Bloomfield, N.J. He has worked in P.R. for more than 30 years in college and conference sports media relations, two agencies and for the International Fight League, a team-based mixed martial arts league, and now is the PR manager for FAN EXPO, which runs pop culture and celebrity conventions across North America. Milani is also the play-by-play announcer for Caldwell University football and basketball broadcasts. He is a proud graduate of Fordham University and when not attending a Yankees, Rams or Cougars game can be reached at Jerry (at) JerryMilani (dot) com.
@gbpackjerry
Previous FloSports To Live Stream 2019 Beat The Streets For Fifth Consecutive Year on FloWrestling.com
Next Pivotal ‘85 N.Y. Baseball Season Remembered In New Book