CBS Extends With PBR Through 2028 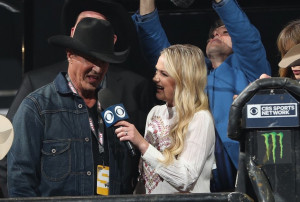 The landmark partnership that has driven PBR’s growth just got another boost.

CBS Sports and PBR have announced a long-term rights extension, keeping CBS Sports as the exclusive television home of PBR through 2028.

Fans will see more PBR broadcast hours on the CBS Television Network as well as the PBR Global Cup on “over the air” broadcast TV.

CBS Sports, the home of PBR since 2012, will add additional broadcast hours during the 2019 season and then televise nearly 20 broadcast hours of programming each subsequent year over the course of the agreement.

Broadcast coverage features multiple PBR Majors – Monster Energy Buck Off at the Garden, Iron Cowboy, and the Jack Daniel’s Music City Knockout Presented By Cooper Tires – and other top events from the PBR circuit, including the five-nation Global Cup.

CBS Sports Network will continue its season-long coverage, airing 28 events including all four Majors – with live coverage of Last Cowboy Standing from Cheyenne Frontier Days – and more than 85 hours each year, opening the season at Madison Square Garden in January and closing it in Las Vegas with the PBR World Finals each November.

The network crowns the overall season champion with exclusive coverage from all five nights of the World Finals, highlighted by a nightly preview show leading into each telecast.

“PBR has been a cornerstone partner within the CBS Sports family for almost a decade. It is an anchor property for CBS Sports Network and consistently delivers a strong, dedicated audience,” said Dan Weinberg, EVP of Programming, CBS Sports.

With CBS, PBR is part of a powerhouse portfolio of must-see sports programming including the NFL, PGA, SEC football and NCAA basketball.

“The multi-year extension allows us to build on the tremendous success we have shared on the cable side while significantly increasing our broadcast coverage, delivering the added exposure and value that only a broadcast network can,” Weinberg added. “We are pleased to keep one of the most exciting and high-adrenaline sports on CBS Sports.”

“PBR’s phenomenal growth over the past decade is due in large part to our very successful CBS partnership,” said Sean Gleason, CEO, PBR.

“We are thrilled to extend that relationship well into the future and are especially excited to bring fans additional hours of coverage on CBS Sports. The extensive coverage, invaluable reach, and top-tier credibility that CBS and CBS Sports Network delivers for our fans will anchor PBR’s growth as the original extreme sport continues to charge into the mainstream.”

Jerry Milani is a freelance writer and public relations executive living in Bloomfield, N.J. He has worked in P.R. for more than 30 years in college and conference sports media relations, two agencies and for the International Fight League, a team-based mixed martial arts league, and now is the PR manager for FAN EXPO, which runs pop culture and celebrity conventions across North America. Milani is also the play-by-play announcer for Caldwell University football and basketball broadcasts. He is a proud graduate of Fordham University and when not attending a Yankees, Rams or Cougars game can be reached at Jerry (at) JerryMilani (dot) com.
@gbpackjerry
Previous TeamWorks Media Launches First Multiplatform Social Media Daily Show ‘La Vida Baseball Live’
Next Duke, Final Four Bound Auburn and Virginia Lead A March Madness Month Of Thuuz Sports Most Exciting Rankings