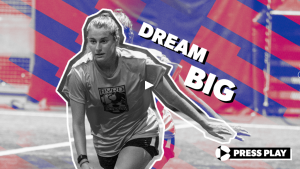 MyCujoo, the world’s largest platform for live women’s football content, is launching its first brand campaign, #shareyourgame, in the wake of the FIFA Women’s World Cup.

The campaign aims to build off of the brilliant moments inspiring global athletes produced at the FIFA Women’s World Cup. It proposes to keep the momentum going and to accelerate the progress made in the women’s game by providing female athletes with tools and content that celebrate athletes’ footballing achievements – all under the #shareyourgame banner.

Drawing on the experiences of a handful of inspirational female footballers from around the globe and creating a platform where every player, team and club on MyCujoo can share their own highlights, #shareyourgame creates a space where participants at all levels can celebrate their skills and love of the game.

The campaign builds upon the strong tradition of advocacy in the women’s game and acknowledges that it is still a long way from parity, while providing a glimpse of what the game is aspiring to: raising the profiles of female athletes, whose play and stories provide them with a platform to be seen, appreciated and followed for their individuality.

Shoko Tsuji, Head of Partnership Success at MyCujoo, believes that the key to building the profile of the women’s game is celebrating its personalities, their passion and their talent, rather than simply paying lip service to broader progress whenever a major tournament comes around.

“Progress in women’s football has been frustratingly slow and one big barrier has been visibility. With #shareyourgame, we are aiming to give women a 24/7 platform to be seen not just as part of a broad movement, but to showcase their skills, their passion and their individuality. We believe that by facilitating this celebration of football, we can unlock a much greater audience for the women’s game.”

Pedro Presa, CEO and co-founder at MyCujoo, comments, “Women’s football is in our DNA – the first game we ever streamed involved Swiss women’s side FC Zurich Frauen. This is an important moment for the women’s game, and while the success of the World Cup was fantastic, we are not at a tipping point yet and the game at the elite level is only a very small part of the conversation.  At MyCujoo we are the heart and soul of women’s grassroots football, focusing on the 99% of football that never gets broadcast.”

With over 50,000 female players on the platform across 50 countries, MyCujoo was the first streaming platform to show live games from six continents on the same day.

Pedro continues, “This season alone,  we’ll be streaming over 3,000 women’s games across more than 190 competitions around the world so it feels like the right time to launch our campaign in order to keep the ball rolling.  We want to show people who love the game that there’s so much more football out there for them to watch.

“It’s also why we’ve chosen a diverse group of players as ambassadors: from World Cup winners and those who played in France this summer, to players hoping to make a career from playing football to a 53 year-old grandmother still playing and passing on her knowledge to the next generation of players.  This is a campaign which aims to represent all of women’s football.”

At the heart of the #shareyourgame campaign are four global ambassadors, each at varying points in their career, but all with the same drive, ambition and determination to succeed and inspire, showcasing the diversity and global passion for the sport.

Exclusive long and short form content have been created with each player and will be hosted on https://www.about.mycujoo.tv/shareyourgame. #shareyourgame will launch on 15 July and will run throughout the summer.

Jerry Milani is a freelance writer and public relations executive living in Bloomfield, N.J. He has worked in P.R. for more than 30 years in college and conference sports media relations, two agencies and for the International Fight League, a team-based mixed martial arts league, and now is the PR manager for FAN EXPO, which runs pop culture and celebrity conventions across North America. Milani is also the play-by-play announcer for Caldwell University football and basketball broadcasts. He is a proud graduate of Fordham University and when not attending a Yankees, Rams or Cougars game can be reached at Jerry (at) JerryMilani (dot) com.
@gbpackjerry
Previous FITE Secures Digital Rights for Pacquiao-Thurman
Next Evolution Of The ‘Ballpark’ Examined In New Book