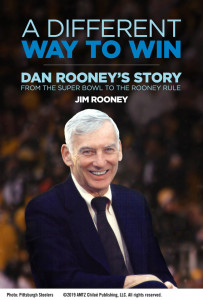 In a press conference at the Pittsburgh Steelers offices on Tuesday, Jim Rooney announced pre-order availability for the book he has been writing about his father’s career since his passing in April 2017.

A Different Way to Win: Dan Rooney’s Story from the Super Bowl to the Rooney Rule is available for pre-order. It will provide an inside look at the unique leadership approaches that made Dan Rooney effective and unique throughout his long career, as observed by his son.

Jim Rooney says the concept of writing a book came to him in 2016 after discussing an article with his father about the Rooney Rule— the diversity and inclusion initiative named after Dan Rooney.

“It’s not a football book,”says first-time author Jim Rooney. “It’s more about my father’s varied and long career in roles inside and outside of sports and how he navigated the many challenges that accompanied that.”

A transformational sports leader, humanitarian and diplomat, Mr. Rooney is remembered for his core values, quiet strength, jumping into challenges, and a willingness to talk to and hear from those who disagreed with him. A powerful voice in the NFL for decades, Mr. Rooney resolved player strikes, influenced league policy, advised three commissioners, and fought for diversity and inclusion in sports and beyond—including as the architect of the Rooney Rule, which requires NFL teams to interview ethnic minority candidates for head coaching and senior football operation jobs.

Former Attorney General Eric Holder compared him to Branch Rickey, the general manager of the Brooklyn Dodgers who broke baseball’s color barrier by signing Jackie Robinson. “Mr. Rooney’s contributions, in his day, can be compared to those of Branch Rickey,” said Holder.

More than two years in the making, this part memoir/part business biography/part history book includes more than 100 hours of interviews with more than 50 sports, business and political leaders, as well as the Rooney family. Among those interviewed are legendary players and coaches; NFL Commissioners Roger Goodell and Paul Tagliabue; representatives from the Irish government and members of the Obama administration; company executives who have adopted the Rooney Rule; representatives from the Fritz Pollard Alliance; and leaders representing minority interests, diversity and inclusion.

“So much in today’s business landscape is about fast-paced, short wins— maybe even shortcuts,” says Jim Rooney. “But my father used patience to focus on the long game and build relationships and trust. He realized the power of this and it was the root of his success.”

A Different Way to Win, which includes a foreword by the legendary Joe Greene, details four main storylines of Dan Rooney’s career:

More information can be found by visiting  www.adifferentwaytowin.com

Jerry Milani is a freelance writer and public relations executive living in Bloomfield, N.J. He has worked in P.R. for more than 30 years in college and conference sports media relations, two agencies and for the International Fight League, a team-based mixed martial arts league, and now is the PR manager for FAN EXPO, which runs pop culture and celebrity conventions across North America. Milani is also the play-by-play announcer for Caldwell University football and basketball broadcasts. He is a proud graduate of Fordham University and when not attending a Yankees, Rams or Cougars game can be reached at Jerry (at) JerryMilani (dot) com.
@gbpackjerry
Previous Players’ Tribune, Amazon Prime Video Highlight ‘Unstoppable’ NBA, NFL Stars
Next UFA to Broadcast CWS Fight Night from Germany