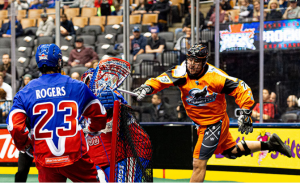 The National Lacrosse League (@NLL), the longest running and most successful professional lacrosse league in the world, today announced the launch of two new online content offerings designed to give fans additional engagement points during the current interruption of play and going forward into the future as well. NLL True Classics will launch Tuesday at noon ET on NLL’s YouTube Channel and will replay complete games from the 2016-17 and 2017-18 seasons and a growing list of games from previous seasons. “In Transition: Live,” a new interview series hosted by Devan Kaney, will be an unscripted, insightful, and a unique opportunity for our fans to join the conversation in real time with a rotating cast of guests. Tune in information and timing can be found on NLL Facebook, Twitter, and Instagram channels.

“Sometimes out of challenge comes opportunity, and our staff realized that by listening to the fans and our partners we had a chance to provide both live and archived content that we had not done before,” said NLL Commissioner Nick Sakiewicz. “’NLLTrue Classics’ will be a resource for all our fans where they can watch classic games from past seasons, and ‘In Transition: Live’ will give our fans and the lacrosse community the ability to talk directly to our players, coaches and talent and learn more about each other. We think both will become staples of our fan engagement platform even after we return to play.”

NLLTrue Classics will launch with 149 total games, approximately 370 hours of game play on YouTube and expand over time as more game archives are mined from the league’s library. “In Transition: Live” will be hosted by Kaney on the league social channels (@nll) and will be an expansion of the popular recorded segments the league has already rolled out with with player and staff.

Jerry Milani is a freelance writer and public relations executive living in Bloomfield, N.J. He has worked in P.R. for more than 30 years in college and conference sports media relations, two agencies and for the International Fight League, a team-based mixed martial arts league, and now is the PR manager for FAN EXPO, which runs pop culture and celebrity conventions across North America. Milani is also the play-by-play announcer for Caldwell University football and basketball broadcasts. He is a proud graduate of Fordham University and when not attending a Yankees, Rams or Cougars game can be reached at Jerry (at) JerryMilani (dot) com.
@gbpackjerry
Previous Local Broadcasters Launch Voices of D.C. Sports: Helping to Feed the City
Next Its Pickleball Mania World Championship To LIVE Stream Thursday In Only Live On-Air US/Global Professional Sporting Event