Home / News / Stenhouse Jr., Haudenschild Featured In Upcoming ‘For the Love of Dirt’

Jerry Milani March 26, 2020 News, On The Air Comments Off on Stenhouse Jr., Haudenschild Featured In Upcoming ‘For the Love of Dirt’ 1,949 Views 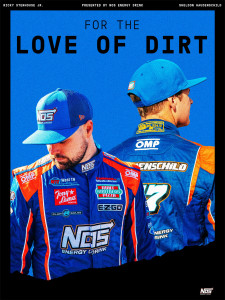 While live sports are held off the fields and courts for the forseeable future, fans looking for original sports content can turn to documentaries, particularly new ones that have been completed just as some classic game fatigue may have set in.

One of those is “For the Love of Dirt,” a documentary featuring NASCAR driver Ricky Stenhouse Jr. and World of Outlaws Sprint Car driver Sheldon Haudenschild. For these two, dirt racing isn’t a sport, it’s a way of life. The film gives unprecedented access behind the scenes to the World of Outlaws racing circuit, and team Stenhouse Jr. and Haudenchild’s pursuit of greatness in one of the most grueling schedules in motorsports. The doc is free to watch and will be available for streaming beginning April 1 here.

“For the Love of Dirt” The documentary gives viewers exclusive, intimate on and off the track access to the raw sport of winged sprint car racing, showcasing the red flags, devotion, fraternity and wheel-to-wheel training of Team 17, as they follow athletes from their win at i55 to the Knoxville Nationals. The Stenhouse Jr. – Marshall race team gives an inside look as they gear up for the Super Bowl of dirt racing. Given the high profile nature of this event, everything is at stake.

Jerry Milani is a freelance writer and public relations executive living in Bloomfield, N.J. He has worked in P.R. for more than 30 years in college and conference sports media relations, two agencies and for the International Fight League, a team-based mixed martial arts league, and now is the PR manager for FAN EXPO, which runs pop culture and celebrity conventions across North America. Milani is also the play-by-play announcer for Caldwell University football and basketball broadcasts. He is a proud graduate of Fordham University and when not attending a Yankees, Rams or Cougars game can be reached at Jerry (at) JerryMilani (dot) com.
@gbpackjerry
Previous Baseball Card History Reimagined: Pop Artists Transform Classics
Next Pittsburgh-Based Ready Nutrition Donates Protein Water, Nutrition Bars to Allegheny Health Caregivers